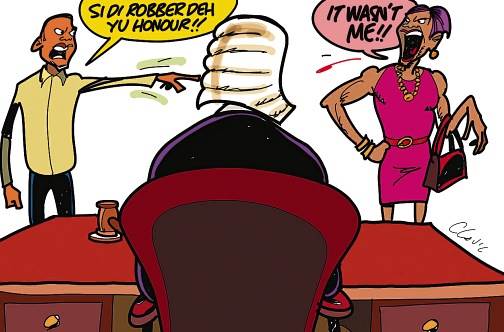 LAST week, it was non-stop drama inside the Corporate Area Resident Magistrate’s Court, which saw cases involving men who got physical and assaulted their women, following relationship problems. Even teenagers were involved in the drama.

In the first case, a man faced the court for beating his lover whom he claimed was making his life a living hell after she caught him having sex with another woman.

Vernon Livingston, who was charged with assault, told the court that his lover had been a thorn in his side for the past six months, even though she claimed that she had forgiven him.

“She catch me with another woman and we make it up and she say she forgive me, but after that she mash up me windshield, she go inna me car and thief out me money, she all a call me boss, she call police on me say me a molest me daughter, she even get two man fi drive way me car,” Livingston told the court.

But the complainant told the court that Livingston, despite asking for her forgiveness and for a chance to continue their relationship, went and slept with the girl a second time.

“I did catch him with the woman and after that I said I would forgive him and we would forget about everything and then he went again and sleep with the girl and I said we finish,” she told the court. “We didn’t speak for two months and we in the same house, and in October him come back and ask me to try again,” she said.

“Cause me say me love him,” the complainant said, as people in the court cracked up in laughter.

“She even mek me lose me job,” Livingston said.

According to him, the complainant refused to leave him in peace, despite him offering to pay over $1 million.

Pusey then asked the complainant: “You don’t think you are molesting him?”

“No Your Honour,” she answered.

“Your Honour, why didn’t he lock me up?” she then asked.

“Cause you love him,” Pusey quickly retorted, sparking more laughter from the court.

The magistrate then told that her actions were too extreme and that she should have been charged for creating public mischief as her action could have got Livingston into severe problems.

“People have me in the community as a mackerel,” Livingston interjected.

But Pusey silenced him, saying: “You don’t have any say, you are the source of all things.”

Pusey then asked the complainant what she should do with Livingston and she told her that she did not want him to go to prison.

“In here is not for the lovelorn. I have no time for broken-hearted people. I have crime to solve,” Pusey remarked.

The complainant, however, insisted that she did not want Livingston to be punished.

“No, Your Honour, that’s not necessary, we are finished,” she said before Pusey ushered them both out of court.

A second man was also brought before the court for attacking his woman and choking her after he accused her of having a lesbian affair.

Dwight Henry was arrested and charged with assault occasioning bodily harm after he held down his female companion at their home and squeezed her neck, causing severe pain and swelling.

The court also heard that the complainant could not eat for days because of how swollen her throat was.

On Tuesday when he appeared in court, the complainant said that Henry attacked her after accusing her of cheating on him with the woman.

“He accused me, saying I was along with a lady and she and I was having relationship, and then attack me,” she told the court.

Henry, however, did not deny her argument and pleaded guilty to the charge and was fined $15,000.

If the fine is not paid, he will serve six months in prison.

In a case involving a teenager, a 15-year-old high school student who surprised the court when it was revealed that she is also a mother, faced the court along with her “baby father’s girlfriend”, following a fight they had on New Year’s Eve.

Antoinette Chavon, 18, told the court that she was at the waterfront in downtown Kingston on New Year’s Eve when the minor hit her with a bottle and burst her forehead.

“I told her baby father,” she said.

“You told her what?” a surprised Pusey asked.

“I told her baby father that I was going to waterfront and he said he is going and that all of us should take the same taxi,” Chavon said.

She said that when they arrived at the waterfront, the accused baby father told them that they should hold hands so as not to get lost, and while she was holding hands and walking, the minor came up behind her and hit her with a bottle and she retaliated by stabbing her.

“Both of you will be in prison and the prince will be free,” Pusey said to them before asking the minor to give her side of the story.

The high school student then told the court that on the night in question, she saw Chavon and both of them were staring at each other and then she saw her advancing towards her and got frightened and hit her.

“I never like how she was coming at me and I feel intimidated; she beat me up already with iron pipe,” she said.

But the magistrate told her: “You should go to prison for it.”

“I have school to finish,” the minor replied quickly.

“The lady going bout her business and you tek bottle and konk her … that is prisonable,” Pusey stated.

However, the magistrate after considering the matter, sentenced both girls to serve a 18-month probation sentences with supervision.

A 16-year-old teenager, who went to collect money from her 24-year-old lover but ended up being involved in a vicious fight with his family members, also appeared in court.

She appeared along with her boyfriend’s sister and niece, Monique Clementson, 35, and her daughter Takeisha Mahabear, 18, who were all arrested and charged with unlawful wounding.

According to the teenager, she was at her home when her boyfriend called her and told her that he got paid and that she should come and collect some money.

She said that after she arrived at her boyfriend’s house, she was talking to him when his niece came to borrow a hammer and asked him if he was going out later that night. But the teenager said that she answered by saying: “You nuh hear him say him ago him bed,” and the niece got upset and went and told her mother.

Shortly after, the teenager said that the mother came and started to curse her and then slapped her in her face, which resulted in a fight in which they both threw stones at each other.

However, she said that the dispute was quelled by her cousin.

The teen said that she then left the premises and was walking away when the two accused and another of Clementson’s daughters attacked her.

“Your Honour, three pon one a murder and I wasn’t going to let them kill me so I had to defend myself,” she said.

The magistrate, after listening to her, called her grandmother and asked: “You know where she went and what she was going for that day?”

The grandmother in response said that she went to visit her sister. She also told the court that the accused had decided to end the matter, but the magistrate refused to close the case.

“Your granddaughter get stab in her back and chest, she could have died, dem can’t mek up,” Pusey said.

She then told the grandmother that she was concerned about the manner in which the teen was being raised and instructed a probation officer to investigate and to find out whether she is a child in need of care and protection.

The accused persons’ bail bonds were extended and a mention date was scheduled for them to return to court on January 23.

Motorist robbed by gays and cross-dressers

Among the drama that unfolded was also an alleged homosexual who was reportedly among a group of 15 homosexuals and cross-dressers who tricked a motorist in New Kingston in the wee hours of the morning and robbed him of his valuables and cut him on his hand.

The accused, Barrington Mellington, 20, of Belvedere, St Andrew, appeared in court on Friday on charges of robbery with aggravation.

The court heard that the complainant was travelling in his motorcar long Trafalgar Road last December about 2:00 am when he heard an unusual sound coming from the left side of his car. The motorist reportedly parked the car in order to investigate and saw that his fender was missing, and he began a search for it.

He reportedly saw a group of men who asked him what he was looking for and when he answered they told him that they had thrown it over a nearby park.

The complainant reportedly went to the park and was held up at knifepoint by the men, who robbed him of his BlackBerry phone, $70,000 worth of jewellery and $2,500 cash.

The court also heard that the complainant received a cut on his hand during the reported robbery.

Following the robbery, the complainant reportedly saw Mellington and pointed him out to the police who arrested him.

But Mellington’s attorney, Tonnelle Beecher, denied her client’s involvement in the robbery and questioned how the complainant was able to distinctly identify her client out of the group, and why he was the only one who was identified.

She also sought bail for him but the request was refused.

He was subsequently remanded in custody until February 15.