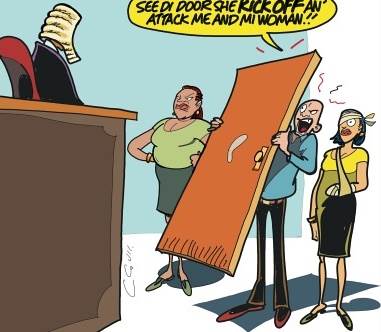 A man, his girlfriend, and his ex-lover appeared in the Corporate Area Resident Magistrate’s Court last week to answer to wounding and destruction of property charges resulting from a fierce fight.

McDonald told the court that he was at home with Johnson when Reid, who is the mother of his child, came to his house uninvited. He said he saw her coming towards his girlfriend and closed the doors. However, Reid kicked the doors off and attacked him and his woman.

“Your Honour, she kick off both of my doors to get to her and bite me on my finger and scratch me on my chest,” he told Senior Magistrate Judith Pusey.

McDonald also told the court that Reid bit his girlfriend.

“Is not the first, I always go over there,” Reid said. However, the magistrate told her that that was not what she asked her.

“You went there when his paramour is there and kicked off his door,” Pusey added.

“I didn’t kick it off, I kicked the door and it fly open,” Reid replied in her defence.

Reid then told the court that she was also injured in the attack as she was bitten, got a bloodshot eye and was repeatedly kicked and thumped by McDonald.

“I am not into the romance, and my emotions are not tied up. All I look at is the law,” RM Pusey told them.

The magistrate then told Reid that she had no right to go to McDonald’s home and kick off his doors, and as such will have to pay for them.

When Pusey asked the three what their plea was, both women said guilty, while McDonald pleaded not guilty.

But the court was told that medical reports relating to the case were outstanding. Therefore, the matter was set for May 5 for the women to return to court for sentencing, while McDonald’s case will be mentioned on that date.

Man remanded after touching woman on her butt

A young man who is accused of touching a woman on her bottom and watching while his friend beat her up after she protested was remanded in custody when he appeared in court.

“I didn’t touch her on her bottom,” Damion Mortimor told the court, explaining that he was merely walking past the complainant, but was blamed for the assault because he was close to her.

He pleaded not guilty to indecent assault but was remanded by RM Judith Pusey after he told her that he was also charged with having sex with a minor.

“You can’t be on bail for committing a sexual offence, then you are charged for another offence under the same act,” Pusey said.

“Your Honour, through me a curse him friend tek it on and drag mi by mi hair and kick me,” she said.

However, when the magistrate asked her if she received any bruises or swelling she said, “No”.

Mortimor’s friend, Romaine Powell, who was charged with unlawful wounding, pleaded guilty and was ordered to pay $2,000 or serve 30 days.

Mortimor will return to court on May 21.

A ‘loader man’ who used a machete to chop a man in his back, told the court that he did so because the man made a pass at him which he did not like.

“This youth a move like him like me and waan mek love to me,” said Ryan Duffus, who appeared to be still upset over the incident.

Duffus told the court that he was in Half-Way-Tree loading a bus when the young man approached him. He said an argument developed between them, the man punched at him and he took out his machete and slapped the man across his back and shoulder.

“Negative thing me nuh work wid,” he added. “Me nuh waan nuh man feel like seh dem waan have sex with me.”

Duffus, who was taken into custody following the February 18 incident and charged with unlawful wounding, was remanded in custody for psychiatric treatment.

However, on Thursday the magistrate, after reading his medical report, encouraged him to continue taking his medication and made a no order ruling in the matter.

Cop and lover in custody for illegal ammo

A police constable and his female companion were denied bail after several rounds of illegal ammunition were reportedly found at their home during a raid.

The police also said they seized a skimming device from the woman.

The court was told that the couple is suspected to be involved in bank fraud and that the police had been secretly investigating Johnson for a while now.

When the couple appeared before RM Judith Pusey on Friday, their attorney C J Mitchell applied for bail but the magistrate refused his application.

“It always amazes me, if any other youth was found with one shot he would not be granted bail, but because a police him fi get bail,” she remarked. “Those things not happening in my court.”

Both accused were then remanded and are scheduled to return to court on April 17.

Woman charged with cruelty to child

A young woman who reportedly locked herself and a seven-year-old boy in a house and beat him so bad that he ended up in hospital was remanded in custody.

The court heard that the child, who is still in hospital, was left in the care of 23-year-old Kimorine Sinclair of Mona Commons in Kingston.

According to the police, on March 11 concerned citizens notified persons from the Child Services Division that a child was being beaten in the Mona Commons area.

The police responded and found the child locked inside the house with Sinclair.

The child was reportedly found with bruises, swelling and scars and was taken to hospital.

Sinclair was taken into custody and charged with child cruelty.

On Thursday when she appeared in court her lawyer asked that the matter be mentioned on Monday and she was remanded.