JAMAICA HALF AWAKE FROM THEIR SLUMBER..OBSERVER AND THE MARLEY STATUE 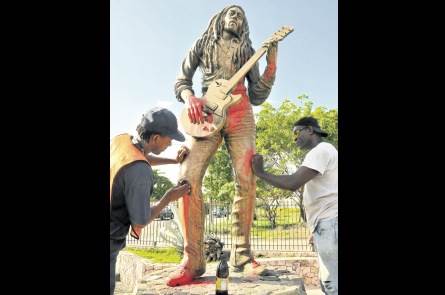 HEAD of the St Andrew Central Police Division Senior Superintendent Fitz Bailey has appealed to Jamaicans to display a greater sense of civic pride and protect the country’s national symbols.

Bailey made the call yesterday after the life-sized bronze statue of reggae legend Robert Nesta Marley OD was daubed in red paint at the Celebrity Park, just outside the Independence Park that houses the National Stadium in Kingston.

The desecration is said to have happened in the aftermath of the drawn CONCACAF World Cup qualifying match between Jamaica and Costa Rica on Tuesday night. No one has been arrested.

Bailey warned that anyone caught perpetrating similar offences will be hit with the full force of the law.

“It is part of their civic duty to ensure that these and other items are protected,” he said.

The statue is the work of renowned sculptor Alvin Mariott, who has also been commissioned to sculpt busts of national heroes such as Alexander Bustamante — the first prime minister of independent Jamaica — Norman Manley, and Marcus Garvey.

He also created the sculpture of an athlete, which was erected directly in front of the grandstand at the National Stadium in time for the country’s first Independence celebrations in August 1962.

The sculpture was inspired by Arthur Wint, winner of Jamaica’s first gold medal in 1948 and the three athletes — Herb McKenley, Les Laing and George Rhoden — who returned with him to capture the Olympic gold medal in the 1952 Helsinki, Finland 4×440 yards relay.

Before he retired in the 1980s, Marriott was requested to create the life-sized bronze figure of Marley.

The monument to Marley has drawn the attention of visitors and locals alike who flock to Independence Park to snap photographs of the sculpture.

0 thoughts on “JAMAICA HALF AWAKE FROM THEIR SLUMBER..OBSERVER AND THE MARLEY STATUE”