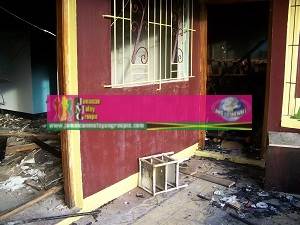 Witness Nicola Brown Baxter Monday morning testified that fire was set to rooms at the house where Clive ‘Lizard’ Williams was believed killed on August 16, 2011 in Havendale, St Andrew.

Brown Baxter, a forensic and fire expert testified that fire was set in the garage leading to the living room and two bedrooms.

There was also damage to the bathrooms, she said.

Her final analysis was that the fire was deliberately set due to the evidence of fuel at the location.

Justice Lennox Campbell allowed Brown Baxter to take the stand after an initial challenge by the Defence.

Kartel and four co-accused are on trial for Williams’ murder.