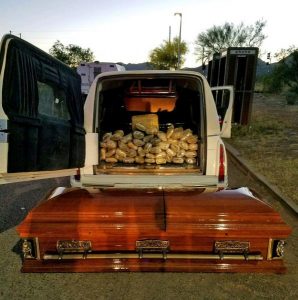 Willcox Border Patrol Agents, from the State Route (SR) 80 Immigration Checkpoint near Tombstone, stopped a vehicle attempting to avoid the immigration checkpoint and found more than 67 pounds of marijuana concealed within a coffin in the hearse.

Early Saturday evening, agents working near the immigration checkpoint noticed a white hearse traveling south towards Tombstone. A while later, agents observed the same hearse traveling north and turning west before reaching the SR 80 Immigration Checkpoint. Upon further investigation of the vehicle, agents conducted an immigration vehicle stop. After several inconsistencies from the driver, consent was requested and granted to allow a canine to perform a “sniff” of the vehicle. Border Patrol canine unit was requested and arrived to the location of the stop and the canine alerted to an odor it was trained to detect.

A search of the vehicle revealed multiple bricks of marijuana worth over $33K.

The vehicle and drugs were seized and the 28 year-old-male driver was arrested and is being processed per Tucson Sector guidelines for contraband smuggling,