MENTAL ILLNESS ON THE RISE IN US JAILS 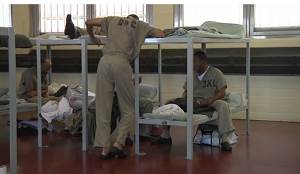 CHICAGO (AP) — Peering through the chain link of a holding pen at the Cook County Jail, a man wrapped in a navy varsity jacket leans toward clinical social worker Elli Petacque Montgomery, his bulging eyes a clue that something’s not right.
“They say I got bipolar, that’s all,” he says.
“OK, are you taking your meds?” she asks.
“When I can get them,” he answers.
“I’m down here every day,” Montgomery says. “Every morning I hear this.”
The Chicago jail and many of its 3,300 counterparts across the country have become treatment centers of last resort for people with serious mental illnesses, most arrested for non-violent crimes. And like other jails, it is awash in a tide of booking and releases that make it particularly unsuited for the task.
U.S. jails, most of whose 731,000 inmates are trying to make bail or awaiting trial, hold roughly half the number in prisons. But last year, jails booked in 11.7 million people — 19 times the number of new prison inmates. The revolving door complicates the task of screening for mental illness, managing medications, providing care and ensuring inmate safety.
“Jails are churning people,” says Henry J. Steadman, a consultant to government agencies on how courts and correctional facilities deal with people with mental illnesses.
Experts have pointed to rising numbers of inmates with mental illnesses since the 1970s, after states began closing psychiatric hospitals without following through on promises to create and sustain comprehensive community treatment programs.
But as the number of those with serious mental illnesses surpasses 20 percent in some jails, many have struggled to keep up, sometimes putting inmates in jeopardy.
View photo
.
The Associated Press has reported that at least nine of the 11 suicides in New York City jails over the past five years came after operators failed to follow safeguards designed to prevent self-harm by inmates. The AP’s investigation into the deaths of two mentally ill inmates at the city’s Rikers Island complex — one who essentially baked to death in a 101-degree cell in February and the other who sexually mutilated himself last fall — have prompted promises of reform.
View gallery
US jails struggle with role as makeshift asylums
In this June 26, 2014 photo, a U.S. veteran with post-traumatic stress sits in a segregated holding …
Federal law protects the rights of people in jails and other institutions. But in temporary holding facilities, dealing with serious, long-term mental illnesses requires operators to rethink what they do, Cook County Sheriff Thomas J. Dart says.
“You’re given a court order by a judge to hold this person in the jail until you’re told not to,” Dart says. “You’re not supposed to do anything other than feed him, give them a bed, make sure they don’t harm anyone else or themselves. … You’re not in there trying to cure people.”
Many jails are dealing with similar dynamics, with sometimes disturbing results.
—In June, federal officials cited “deplorable” conditions for mentally ill inmates in the Los Angeles County jails as partly to blame for 15 suicides in 30 months. The L.A. system, the country’s largest with 19,000 inmates, has been under federal supervision since 2002, but still fails to adequately supervise inmates “with clearly demonstrated needs,” the Justice Department concluded.
—In Pensacola, Florida, Justice officials last year issued a scathing report about conditions at the Escambia County Jail. Records showed many inmates who requested care were never seen by a mental health professional. When inmates refused to take medications, the jail merely removed them from its list of those with a mental illness.
—In Columbus, Nebraska — seat of a county of 33,000 — six Platte County Detention Center inmates attempted suicide early this year, as many as in the previous 10 years combined. Jon Zavadil, the recently retired sheriff, says about 80 percent of all inmates medicated for some type of mental illness.
“Every county jail in the state has the same problem,” says Zavadil, who blames Nebraska lawmakers for voting to close two of the state’s three public psychiatric hospitals over the past decade.
Researchers long warned mental illness was being “criminalized,” as police arrested more people for low-level offenses.
In the 1980s, researchers found about 6 percent of inmates showed signs of serious mental illness. A survey published in 2009 found 17 percent of jail inmates with serious mental illnesses. Individual jails report far greater numbers.
Today, many of those jailed with mental illnesses have grown up in a system full of holes.
“Even what we had when I started doing this work in 1988 was better than what we have now,” says Nancy Koenigsberg, legal director for Disability Rights New Mexico, which helped bring suit against her state’s Dona Ana County Detention Center in 2010 for mistreating mentally ill inmates.
But while the jail has since increased its mental health staff, New Mexico cities and counties have continued closing drop-in centers and other programs to that help maintain treatment. Many people wind up repeatedly picked up for relatively minor crimes.
At the Volusia County Detention Center in Daytona Beach, Florida, administrators compiled a list of such “frequent flyers.” The 19 worst had been collectively jailed 894 times, mostly for minor offenses. Nearly half had a history of mental illness.
“A lot of their behavior was low level,” says Marilyn Ford, the county’s corrections director. “So they cycle through in a fairly short period of time and they never make it to prison.”
Chicago’s jail can offer an island of stability for inmates with mental illnesses, Dart says. In coming months, Dart plans to convert a former boot camp into a transition center to help those with mental illnesses after release.
But William, a 62-year-old inmate who says he’s been jailed nine or 10 times for theft to support a drug habit, is doubtful. Many judges dismiss mental illness as a factor in crimes, says the inmate, diagnosed with depression, anxiety and symptoms of bipolar disorder. Outside jail, treatment is hard to get.
“Once we leave here,” he says, “we’re back on doom street.”
___
Adam Geller can be reached at features@ap.org. Follow him on Twitter at https://twitter.com/adgeller .