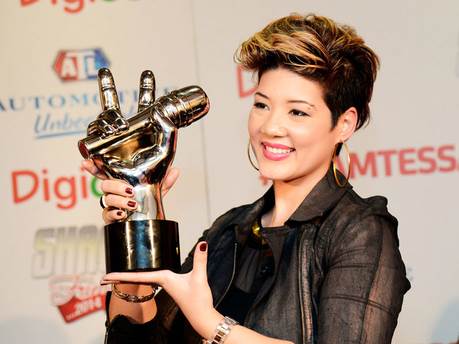 Let’s get one thing out of the way: Tessanne Chin can sing. Not like your sister-in-law in the church choir. This girl can grab a note and raise your ancestors with it. After years of hard work – hustling restaurants, hotels, corporate soirees, soca fetes, Jazz & Blues – she deserved a break.

Thirteen weeks on American network television qualified big time. Her life will never be the same. She now has a bona fide recording contract with Universal Music Group and a guaranteed crack at the biggest media market in the world. That’s awesome-sauce (I think that means ‘really good’). We should all be so fortunate.

But this isn’t about Tessanne. This is about us. The rest of us. The 2.8 million of us who aren’t her, who sat glued to our screens every Monday night for months, who generated a never-ending stream of Facebook and Twitter posts like so many hyperactive schoolgirls, who bought T-shirts emblazoned with empty slogans, who plastered results in our workplaces, who harassed our relatives abroad to vote, who all in all behaved as if this privileged 28-year-old entertainer was the persecuted civil-rights leader on whose shoulders the very future of the country depended.

TIME FOR A REALITY CHECK

None of it mattered. It’s actually hard to think of anything more insipid than the results of a reality television show. Your breakfast has a bigger impact on your life. Your last phone call. Your underwear. There are more than 320 reality shows on American television alone. Makeover shows. Rescue shows. Dating shows. Lifestyle shows. Talent shows. Celebrity shows filled with the expired quasi-celebrities of other reality shows. An endless parade of contestants, eliminations, testimonials, pancake makeup and choreographed tears.

Remember Javier Colon? Jermaine Paul? Cassadee Pope? Danielle Bradbery? Neither does anyone else. Those were the other four American winners of The Voice, the three-year-old show invented by Dutch media tycoon Johannes Hendrikus Hubert de Mol, Jr. His other contributions to humanity include Big Brother, Fear Factor and Deal or No Deal, whose combined revenues have made him one of the richest men in the world, briefly cracking the Forbes 500 list. We’ll return to Mr de Mol.

Many Jamaicans think their borderline obsession was a vaguely noble form of ‘support’ for the songstress. As if our slack-jawed viewing habit somehow transported good vibes across an ocean and gave her the strength to overcome otherwise-insurmountable psychological hardships. News flash: Tessanne Chin spends most of her time thinking about herself, and what’s left over on her friends and family. Just like you, just like me. These weren’t military expeditions; they were music auditions. Stacked against her parents and her husband, your ‘support’ amounted to diddly-squat.

NOT USED TO GLORY

The Jamaican writer, Colin Channer,giddy in the online pages of the Wall Street Journal, alternately suggests: “Tessanne is more than her talent. She represents … the sense that we’ve always been good … but have often had to accept second or third position, because that’s just the way of the world.” Mr Channer, who lives in Massachusetts and collects a salary from Brandeis University, has a point. If anything, he’s being charitable. International track meets aside, we’re not used to medalling at all.

We’re used to crumbling infrastructure and rampant crime, to heat and heartache and hurricanes. We’re used to being 83rd in transparency, behind Mongolia, and 145th in literacy, behind Micronesia, and 188th in economic growth, behind Montenegro. We are used, in short, to being irrelevant. Our sights are so low that one woman moving from modest to outright success is cause for mad celebration.

Mr Channer and Ms Chin, and indeed Mr de Mol, he of the US$2.2 billion net worth, did not become extraordinary by watching television. They did not resign themselves to vicariously reliving the achievements of others, or projecting fawning solidarity on to strangers. They dreamed big, and worked hard, and deep down inside absolutely refused to be ordinary, to be like the rest of us. If we are ever to become great, individually and as a nation, we must stop ‘supporting’ them, and start lifting ourselves.

Keiran King is a playwright and actor.

0 thoughts on “MI NUH GET YUH”