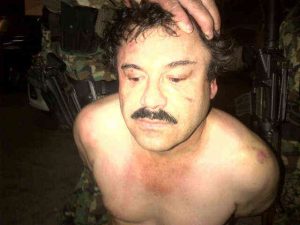 The forces were following yet another tip about the whereabouts of one of the world’s most wanted drug kingpins, Joaquín Guzmán Loera — known as El Chapo, which means “Shorty” — who had eluded such raids for 13 years since escaping from prison in a laundry cart. With an army of guards and lethally enforced loyalty, he reigned over a worldwide, multibillion-dollar drug empire that supplied much of the illicit cocaine and marijuana to the United States despite a widespread, yearslong manhunt by American and Mexican forces.

This time, however, Mr. Guzmán, believed to be in his mid-50s, did not slip out a door, disappear into the famed mountains around his northwest Mexico home, or prove to be absent, as he had in so many previous attempts to apprehend him. He apparently had no time to reach for the arsenal of guns and grenades he had amassed or dash into a storm drain or specially dug tunnel, as authorities said he recently did minutes ahead of pursuers.

Mexican marines and the police, aided by information from the United States Drug Enforcement Administration, immigration and customs officials and the United States Marshals Service, took him into custody without firing a shot, according to American and Mexican officials.

Mexico’s attorney general, Jesús Murillo Karam, said a later forensic exam made it “100 percent” certain the man was Mr. Guzmán; the tests were done to avoid the kind of embarrassment Mexican officials faced in June 2012 when they announced the arrest of Mr. Guzmán’s son, only to later discover it was not him.

He faces a slew of drug trafficking and organized crime charges in the United States, which had offered $5 million for information leading to his arrest.

Mr. Guzmán’s Sinaloa Cartel is considered the largest and most powerful trafficking organization in the world, with a reach as far as Europe and Asia, and has been a main combatant in a spasm of violence that has left tens of thousands dead in Mexico.

“Big strike,” said a Twitter posting by former President Felipe Calderón, who had made cracking down on drug gangs a hallmark of his tenure.

But it was the forces under the control of President Enrique Peña Nieto, who has sought to steer the image of Mexico away from drug violence, that produced the biggest arrest in a generation. While Mr. Peña Nieto has not allowed American law enforcement officials the kind of broad access in Mexico that Mr. Calderón had permitted, the two countries have continued to work together on big cases.

“I think it’s important that first he faces the charges against him in Mexico,” the ambassador said.

It remains to be seen if the arrest will interrupt Mexico’s thriving drug trade. The capture or killing of a drug lord sometimes unleashes more violence as internal feuds break out and rivals attack. And given the efficiency of the Sinaloa Cartel, it is possible the group will manage a smooth transition to a new leader and continue with business as usual.

“The takedown of Chapo Guzmán is a thorn in the side of the Sinaloa Cartel, but not a dagger in its heart,” said George Grayson, a professor at the College of William and Mary who studies the drug war.

Over time, as he eluded capture, his legend and the mystery of his whereabouts grew. He had been rumored to be in Guatemala, Argentina, Bolivia, and even, as Mr. Calderón once speculated, in the United States, where his wife had given birth to twins.

But in the end, he was captured not long after doing what so many cartel bosses do: having a party in Mazatlán.

Few details were available early on Saturday, but a picture of Mr. Guzmán, who appeared kneeling and handcuffed with a few cuts on his face and shoulders, circulated among law enforcement officials.

Later in the afternoon, he was paraded before the media at a news conference at Mexico City’s international airport, in dark jeans, a dress shirt and noticeably blacker hair than in previous photographs. Masked Mexican marines gripped him as he was walked to a helicopter that would take him to prison.

VIDEO|0:41Pedro Valtierra/European Pressphoto AgencyMexican Drug Kingpin Is Captured Joaquin Guzman, “El Chapo,” one of Mexico’s top drug bosses and a Forbes list billionaire since 2009, was captured today in a Mexican resort after a 13-year manhunt.
The authorities seized an arsenal during his arrest, suggesting the lengths he went to protect himself: 97 large guns, 36 handguns, 2 grenade launchers, a rocket launcher, and 43 vehicles, several of them armored.

Without specifying their location, Mr. Murillo Karam said Mr. Guzmán had seven houses, with reinforced steel doors and connected by tunnels that allowed him time to escape just ahead of the police.

An American law enforcement official said that last week, the D.E.A. assisted Mexican agents in a raid on an upper-class neighborhood of Culiacán, Mexico, the Sinaloa State capital, arrested several security people for Mr. Guzmán and discovered the tunnels, with openings to them in the showers of several homes.

Mr. Guzmán fled to Mazatlán, the official said, and the Mexicans and Americans followed.

As it became apparent that Mr. Guzmán had been caught, some in Mazatlán expressed concern. At a breakfast gathering for local businessmen, a few attendees got up and left immediately upon hearing the news, according to a witness.

Doug 12 minutes ago
They should clearly execute this el chapo, so that the next el chapo will know that we mean business in the war on drugs and that we aim to…
Peter C 21 minutes ago
A miraculous escape is in the works
Capelaava 27 minutes ago
There are many here who call for decriminalization or legalization of most drugs. I agree with this, but it is beyond reality. There are so…
SEE ALL COMMENTS WRITE A COMMENT
“It’s bad news for Mazatlán,” said one of the men at the breakfast. “He was keeping the peace.”

In the years since he escaped arrest, Mr. Guzmán took on near-mythic status. He landed on the Forbes list of the world’s richest people. He picked up the tab for entire restaurants, or so the stories go, to ensure diners would remain silent about his outings. According to a leaked diplomatic cable, he surrounded himself with an entourage of 300 armed men for protection. And narcocorridos, folk ballads in tribute to drug lords, were sung in his honor.

It seemed as if he was always tipped off or managed to slink away just as Mexican forces, often relying on American intelligence, closed in.

Although Mr. Guzmán had remained the head of the Sinaloa cartel, security analysts have long suspected that much of the day-to-day management fell to subordinates still at large.

Still, Mr. Guzmán’s fall carried a potent symbolic boost for Mexican security forces, which have killed or captured 25 of the 37 most-wanted organized crime leaders announced in 2010.

Mr. Guzmán was born in poverty in the foothills of the Sierra Madre in Sinaloa State and dropped out of school by third grade. His first foray into drug smuggling came in the late 1980s, when, the State Department said, he began working for Miguel Ángel Félix Gallardo, once Mexico’s biggest cocaine dealer, as an air logistics expert.

Mr. Guzmán astutely exploited the cocaine boom in the United States at the time, making valuable contacts along the transport chain from Colombia to Arizona.

By the time the Mexican authorities captured Mr. Félix Gallardo in 1989, Mr. Guzmán had already begun forming his own cartel.

In 1993, he was charged in the United States with money laundering and racketeering, and three months later, he was arrested and convicted in Mexico on drug and homicide charges and sentenced to 20 years in prison.

As American investigations continued, the drug and racketeering indictments piled up. One in 1994 said Mr. Guzmán continued operating his organization through a brother while jailed.

Then, in January 2001, Mr. Guzmán’s criminal career took a stunning turn with his escape in the laundry cart that was wheeled out of the prison. In what was considered further proof of his broad-based power, authorities suspected prison officials helped him escape.