MYRIE WAS STRESSED OUT AFTER FINGER EPISODE IN BARBADOS 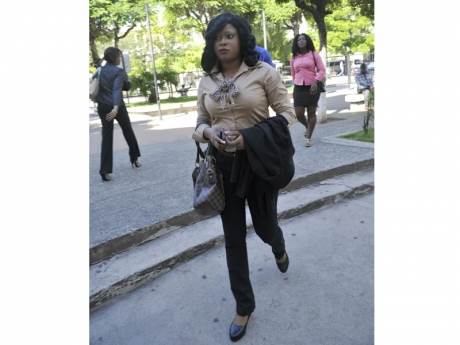 Counsellor had to assist ‘stressed out’ Jamaican woman

SHANIQUE Myrie looked a composed woman as she sat on a stump near her home on Cassia Crescent, near Marl Road in West Central St Andrew, hours after a historic ruling was made in her favour by the Caribbean Court of Justice (CCJ) on Friday.

If she was elated at the judgement, which will see her collecting $3.8 million, it did not show on her face.

Two years, six months and 20 days had passed since a woman immigration officer at the Grantley Adams International Airport in Barbados ordered her to squat before inserting a gloved hand inside her vagina, probing violently and accusing her of going to the island to “steal men” and being a drug mule.

Myrie was then locked in a filthy cell, forced to sleep on a small board cot with another Jamaican woman who was also detained, before both were deported to Jamaica without being given a chance to shower.

The experience took a serious toll on Myrie, who had to seek the help of a psychiatric counsellor to get over the trauma of the ordeal.

“It was not easy. I was very stressed out. I was so stressed that I crashed my car with [my] sisters in it on the Portmore Toll Road one week after I came back. Thankfully, the counselling sessions worked, and I am not as traumatised as I was before. I still have flashbacks, but I have to be strong,” she told the Sunday Observer.

Myrie showed remarkable strength of character by coming forward and exposing herself to public scrutiny by being open, in an interview with the Jamaica Observer, about the finger-raping ordeal that she was forced to go through.

During that interview, a few days after the March 14, 2011 incident, Myrie was shell-shocked and shattered by the experience.

But now, her bravery has paid off.

“I felt very depressed and ashamed, but I had to have strength because I could not hold that,” she told the Sunday Observer on Friday. “What she did to me was very wrong, and I am proud now that I have come forward, as something as disgraceful as that will never happen to another woman in Barbados again. I am proud that I spoke out.

“When I came back and was at the airport, I almost fainted as I cried and cried and cried. Even my friend who picked me up started crying when I told him what had happened to me,” she said.

As Myrie spoke, her mother Julene Virgo, sister Antoinette Dacosta, and husband Troy Pusey stood around and seemed pleased that their loved one had finally gained justice for what they described as a terrible act.

“The support from my family has been great. Everybody around here in this community has supported me from day one, and I would like to publicly thank them,” Myrie said.

Before the ruling was handed down, negative comments were hurled at her by mischievous persons who questioned her reason for going to Barbados. They also jeered her about the ordeal.

“Those comments used to bother me a lot because people didn’t know how hard it was for me,” she said.

Myrie was drilled by attorney Roger Forde during the historic sitting of the CCJ in March at the Jamaica Conference Centre in Kingston.

Forde took pot shots at her credibility and sought to paint her as a liar who concocted tales of an ordeal because she was denied entry.

She said that it took great restraint on her part not to get upset in court and remain composed as she was being cross-examined.

“I felt filled with rage, but I realise that he was just doing his job,” she said.

Myrie was required to go back to Barbados to point out the woman who defiled her and show officers of the court the nasty room where she was confined for hours without being given food or water.

“When I went back to Barbados I was also filled with rage, especially when I saw the woman who did that to me. I went along with it at the time because I know I was in their country and I never knew what they would do to me. I never wanted them to put any drugs on me so I just went along,” she said.

Myrie, while appreciative of the cash she will collect, said that all along her primary objective was not money.

“It was never about money. I could not live with that, and no woman should even think about treating another female like that. I know that things will be better for Jamaicans who travel to that country now. I will never go back there,” she said.

Myrie will now be known as the Jamaican woman whose bravery to speak up for her rights forced Barbadian border officials to revamp the way they treat Caricom visitors to their shores who have not broken any laws or will not be a burden on their state.

The executive summary of the CCJ’s reserved judgement ordered the country to allow Caricom nationals who are denied entry on those grounds to contact a family member or a representative of their country, to acquire the services of an attorney and also to be informed of the reason for the denial, promptly and in writing.

“The Court held that this treatment constituted a very serious breach of Ms Myrie’s right to entry and so she was entitled to be awarded damages,” a section of the summary stated.