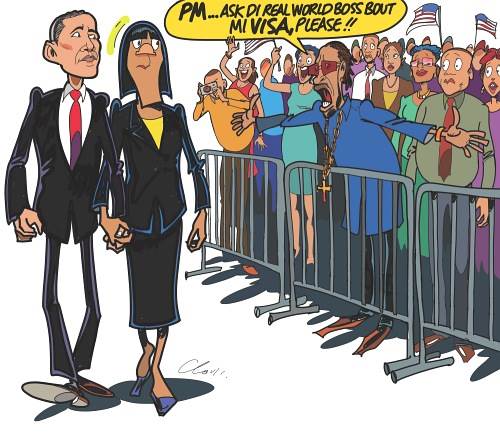 Mayor of Kingston and St Andrew Senator Angela Brown Burke today met with vendors who were recently removed from Heroes Circle, Rae Town and the Harbour View Roundabout and their political representatives at the Church Street offices of the council.

The vendors were moved just ahead of United States President Barack Obama’s one-day visit to the island last Wednesday.

Brown Burke, however, said in a media release issued Thursday, that the move was in keeping with the Kingston and St Andrew Corporation’s continuous effort to address illegal vending across the municipality.

Vendors reportedly agreed that they were operating illegally in “no vending” areas, without the permission of the KSAC, but are being temporarily allowed to operate in their respective areas until a suitable area was found that would meet the specific requirements of the KSAC or other arrangements made in the same area.

It was pointed out, however, that they would have to get requisite licences and permits from the KSAC and a Food Handlers’ Permit from the Public Health Department to operate. Provision for running water and sanitary convenience would also have to be made.

“There must be absolutely no blocking of roadways or sidewalks to impede pedestrians or vehicular traffic and you must leave your surroundings clean when you finish each day”, the mayor warned.

She said, while there is an agreement that they will be operating temporarily, discussions regarding future operations in that area will continue, to ensure that there are no further breaches. She also insisted that no vendor will be added to the original list and the future of their operations will be discussed with all who were there before.

In the meantime, Member of Parliament for Kingston Western Desmond McKenzie said that he was pleased with how the mayor dealt with the discussions held with the Heroes Circle vendors.