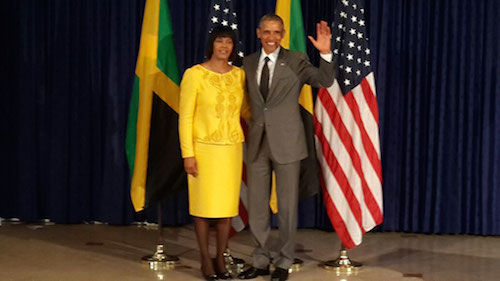 RJR News has been informed that the issue of the expungement of Marcus Garvey’s criminal record in the United States was raised by Prime Minister Portia Simpson Miller during this morning’s bilateral meeting with President Barack Obama.

Our sources indicate that the president has promised to look into the request.

Garvey was convicted of Mail Fraud in the United States after a trial which end on June 23, 1923.

Marcus Garvey appealed his conviction, but was denied.

In 1927 he was released from prison and deported to Jamaica.

Garvey continued his political activism and the work of UNIA in Jamaica, and then moved to London in 1935.

Garvey died in London in 1940; twenty years later, his body was removed and taken to Jamaica, where the government proclaimed him Jamaica’s first national hero and re-interred him at a shrine in the National Heroes Park.