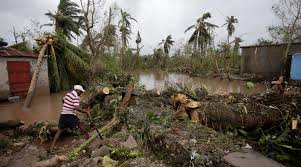 The United Nations (UN) has warned that it could take days for the full impact of Hurricane Matthew in Haiti to emerge, as the death toll soars to more than 800 dead.

According to a report from BBC News today, the death toll has doubled, and may rise as a definitive number is taking time to obtain because of the intensity of the damage to remote areas that are inaccessible because of flood water.

Many of the deaths in Haiti were in the south-western coast, which suffered the full force of the hurricane this week.

Rescue efforts are under way to assess the destruction left in the wake of the most powerful Caribbean storm in a decade.

At least one major town in the south – Jeremie – has been 80% destroyed, with aerial footage showing the scale of destruction with hundreds of flattened houses.