Businessman Patrick Powell has been freed of all charges related to the 2011 shooting death of 17-year-old Khajeel Mais.
After deliberation, the jury on Monday returned a not guilty verdict on charges of murder and shooting with intent.
Powell was being tried for the shooting death of Mais, who was reportedly travelling in a taxi, which collided with a BMW X6 motor vehicle. It is alleged that the driver of the BMW got out and fired at the taxi, hitting the boy.
The prosecution today told the court that there is no evidence to confirm identification of the accused. They also questioned the credibility of the main witness statement provided by taxi driver Wayne Wright. 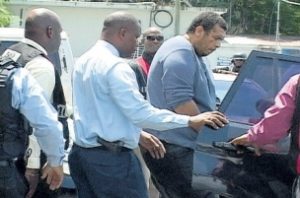 Lead Prosecutor Jeremy Taylor, in making his application said that in his opening statement, he pointed out to the court that the case hinged on the identification of the accused and the credibility of the witness statement.
However, he said that the prosecution was unable to say without a reasonable doubt that Wright was present when Mais was shot. He also spoke about Wright backpedaling on his statement.
He said Wright did what he wanted rather than what was right as it relates to the evidence he had given to investigators.
“He had decided to take a certain course,” said Taylor.
Wright was on Friday adjudged a hostile witness by the prosecution, after permission was granted by Justice Lloyd Hibbert to treat him as such because he showed himself to be inconsistent and adverse.
The prosecution had 28 witnesses, 12 were called and 16 were left, but the prosecutor said even if he had called the remaining witnesses the issue of identification would still have been a problem.
The parents of Mais refused to comment but the boy’s father said to contact them within the next two weeks. The disappointment could be seen etched on their faces
Tanesha Mundle