PEOPLE’S National Party (PNP) General Secretary Paul Burke is speaking out in defence of party leader Portia Simpson Miller, saying biting and suggestive remarks she made at a recent meeting in St Ann South Eastern have been taken out of context.

In an audio clip of the speech, which has been making the rounds on social media over the past two days, Simpson Miller can be heard chiding dissenting Comrades at the meeting which was held last week Wednesday in Claremont, and warning them that “this is one woman who never run from a fight with anyone yet”. 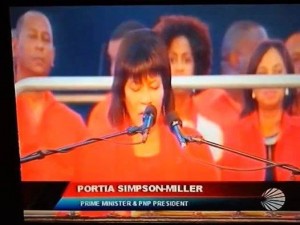 “I represent one of the strongest constituencies in Jamaica; don’t play with me, I don’t play games. I work hard for this movement from 1974 ‘til now, nuh boy, nuh gyal can’t talk to me… I will come back here for another meeting and I know who I will bring,” Simpson Miller is heard saying, apparently making reference to her St Andrew South Western constituency.

The PNP leader’s remarks came after some Comrades expressed their disapproval of candidates who had been nominated to represent the party in the November 28 local government election.

A number of Jamaicans on social media and radio talk shows have deemed the remarks as threatening because of remark that she doesn’t and will not allow anyone to disrespect her.

But, yesterday, Burke said Simpson Miller has done nothing wrong

“As part of a programme of meetings, the party president went to South East St Ann and toured the divisions and at a spot meeting, which goes against the party’s political code of conduct, individuals were disturbing the meeting,” Burke told the Jamaica Observer in a telephone interview yesterday.

“When she said, ‘I’m not afraid of anyone,’ it meant that she is not intimidated by the noise or the misconduct of those persons and I understand that less than 40 persons, were there and persons are going around trying to confuse PNP supporters that former PNP supporters nominated are representatives of the PNP,” he continued.

In reference to Simpson Miller’s statement that she she knows who she will bring on her return to the constituency, Burke said the party leader was making reference to a team of canvassers to conduct surveys as their were people causing mischief in the division.

He said that the party leader was simply calling for political action to be taken and that her statement is being misrepresented by many.

“… I received a mix of both [views]; some people have heard it on the media and don’t understand in what context what was happening and have been alarmed. I haven’t heard any cases of overreaction or calls for any damage control programme. The speech has been truncated… and it can be a cause for concern,” Burke stated.

As it relates to the how the party will handle the growing divisions in St Ann South Eastern, which is represented by Member of Parliament Lisa Hanna, Burke said there is nothing the party can do if members choose to run as independent candidates.

He, however, said that the party is working to ensure that supporters are clear on who are the official PNP candidates for the divisions as there can be no “independent PNP candidates”.

“… So the PNP has four candidates in South East St Ann, all duly selected and nominated as PNP candidates. [They are] Ian Bell for the Beecher Town Division; Lydia Richards for the Benstonton Division, Lloyd Garrick for the Moneague Division; and in the Claremont division, Lambert Weir,” Burke outlined.