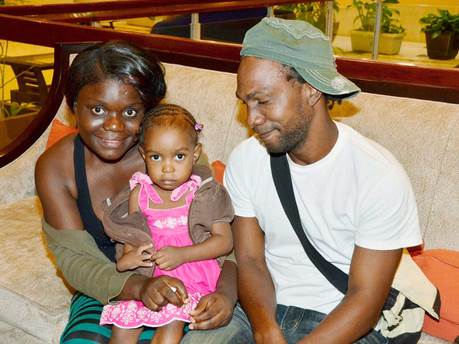 Since her photographs were posted on Facebook two weeks ago, they have been shared by more than 1,000 persons.

Her birth defect is tagged an anorectal malformation. Doctors at the Bustamante Hospital for Children were forced to cut her intestines from the side of her stomach, wrapping them around her small frame in a diaper format. This is actually a colostomy bag which stores the faeces.

“Her faeces becomes a part of the wrap, posing hygiene risks and irritation hitting her overall immune system,” bemoans Marianna F, the woman who triggered a firestorm after she posted photographs of the youngster on the popular website, Facebook.

The slightest cold or cough could put her life at risk, Marianna F told The Sunday Gleaner.

Kalia’s parents, Tamara Richards and Henry Allen, concurred, explaining that as soon as one medical issue improves, another rears its head. Surgery, they say, can be performed to correct their daughter’s condition.

She was scheduled to undergo an operation last August, but had an asthma attack just before the procedure. The next date she is scheduled for is April 2 and, if accepted by Canada’s Sick Kids Hospital, her surgery could happen even sooner.

She has missed one important surgery so far, because of constant illness, and a deadline to submit medical records to Sick Kids.

“I have been to the surgical unit at the hospital four times, trying to get the medical records, but each time I go, I am told this can only be done by the bigger heads,” a frustrated Richards stated.

Checks by The Sunday Gleaner revealed that Richards might now be able to get help from the medical records department.

“She shouldn’t have gone to the surgical department for medical records,” said Kathleen Cooper-Brown, head of patient affairs at the Bustamante hospital.

Unable to say how long it will take to get the records after the request is made, Cooper-Brown said it was dependent on the availability of the doctors treating baby Kalia’s condition.

“There may be four different doctors treating the various conditions, but ask the mother to come to me; we will help as much as we can,” she promised.

Kalia’s latest ailment is reflux of urine, wherein the urine goes back up the ureters towards the kidneys, and keeping her healthy and comfortable is taking a toll on her parents’ pockets.

Her mom is currently a student enrolled in a housekeeping course, and her father, who is unemployed, says they need colostomy bags, extra-large diapers, which she wears, and medium diapers that are placed around her to cover her intestines when they are out of bags, and emollient or other ointments for diaper rash.

Even while he tries to find a job, he has to be very careful going in and coming out of his community because of gang warfare, and he could be drawn into the fold simply because of his address.

“It has been quite difficult for our family over the last two years, as Kalia has had to be admitted to the hospital on numerous occasions. In the first month of her life, she had to have two surgeries – one to enable her to swallow her food and for it to go where it is supposed to, and the other was to take out her intestines,” said Allen.

Her surgery offered a 50-50 chance for living. Many children die from the anus surgery, but to not have surgery means certain death. She also needs surgery to set her hand in the right position.

“We are keeping the faith and praying that she will not only live, but have a life in which she can choose to become anything she wants,” said Allen.

For Marianna F, who said this was not her first visit to Jamaica or her first time in a garrison community, something special happened to her when she visited Tel-Aviv.

“I had just come in from a morning spent in the neighbouring garrison of Southside. I recall it was a hot day and I was digesting everything that I had been seeing around me. With each step, I came across many smiles … that perhaps shared a struggle … . All throughout this time, I was documenting the neighbourhood with my camera.”

She said, however, the most eye-opening moment for her came when she walked towards what appeared to be a tin-shack house.

“I recall that moment very well. The scorching heat had worn me out. A stray dog walked past us. From time to time, there was an unpleasant smell in the air. I then saw a young girl sitting in a corner with some tears rolling down. It was Kalia.”

Marianna F said she wasn’t aware of Kalia’s full story, but the look on her face touched deep.

“I later found out that she had a rare health condition known as VACTERL, which presents itself as a combination of malformations.”

She said what she felt at the moment was beyond her.

“I knew I had to share her story and picture, which I did on my Facebook page. My objective was to build awareness around her situation and potentially get some support.”