Tension in Tivoli after police killing

TIVOLI Gardens in West Kingston remained on edge last night following the killing of a teenager by the police, which sparked a violent protest by residents who stoned the Denham Town Police Station and a police post in the community while gunmen sprayed the buildings with bullets.

Nineteen-year-old Tevin Gordon, otherwise called Scrappo, was shot and killed during an alleged encounter with the police at around 7:30 am on the third floor of Building 12 in an area of the community known as Bumps. 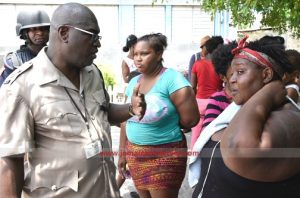 Jamaica Observer that police officers were on operation in the community when they accosted a group of men who ran in different directions.

Chambers said one of the men ran into a building and during an alleged confrontation with the police was shot and injured and later pronounced dead at the Kingston Public Hospital. A 9mm pistol with eight rounds was reportedly taken from the young man.

He said that following the shooting, the police came under attack from members of the Young Generation Gang, of which Gordon is belived to be a member, and had to call for assistance from Mobile Reserve and the Jamaica Defence Force.

“Police on duty at the police post came under attack from gunmen and Denham Town Police Station was also fired on,” SSP Chambers said.

The senior officer said that, while the gunmen were attacking the police, residents mounted a fiery roadblock on Spanish Town Road and also hurled stones and bottles at the police resulting in two officers being injured — one in the face and the other on his arm.

But residents disputed the police’s version of the shooting and demanded justice.

“Dem kill Tevin, dem go inside his house and kill him. It was no shoot-out, but that is what dem do all the time go inna people house and fire one barrage a shot and then seh a shoot-out and come and seh dem find gun when is dem a walk with spare gun,” said one resident, who identified herself as Tuni

“We don’t know why police officers don’t like us in Tivoli Gardens. A sleep him a sleep inna him house and dem go wake him up an him hold up him hand. All him tripe a come through him side. Dem do mi friend bad and him nuh live no life yet, dem mek di whole a him bleed out,” Tuni added.

The residents insisted that there was no shoot-out and that it was the police who were firing gunshots in the area and teargas on residents.

“Through dem neva want nobody video dem when dem a come down wid di body dem fire up one bag a shot and throw tear gas,” one resident said.

Meanwhile, Senior Superintendent Steve McGregor, territorial Commander with responsibility for operation, said that there will be a meeting on Tuesday evening between residents and the police to ease the tension in the community.

“I will take a personal interest in the situation and on that day I will give them an update as to who has been charged, who has been transferred and so on,” he said, referring to police.

The matter is being investigated by the Independent Commission of Investigations.