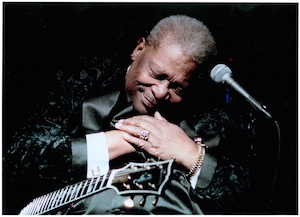 King, known for his hits My Lucille, Sweet Little Angel and Rock Me Baby, died in his sleep in Las Vegas.
Born in Mississippi, King began performing in the 1940s, going on to influence a generation of musicians and work with Eric Clapton and U2.
Once ranked as the third greatest guitarist of all time, he had been suffering ill health in recent months.
He was recently taken to hospital with a diabetes-related illness.

Fellow musicians paid tribute to King including blues guitarist Buddy Guy, who often played with him.
“BB King was the greatest guy I ever met,” he wrote on Instagram.
“The tone he got out of that guitar, the way he shook his left wrist, the way he squeezed the strings… man, he came out with that and it was all new to whole guitar playin’ world.
“He could play so smooth, he didn’t have to put on a show. The way BB did it is the way we all do it now. He was my best friend and father to us all.”
Clapton posted a video tribute on Facebook to express his sadness at the death of his “dear friend”.
“I want to thank him for all the inspiration and encouragement he gave me as a player over the years, and for the friendship that we enjoyed,” he said.
“There’s not a lot left to say because this music is almost a thing of the past now, and there are not many left who play it in the pure way that BB did. He was a beacon for all of us who love this kind of music.”
Lenny Kravitz tweeted: “BB, anyone could play a thousand notes and never say what you said in one.”
Bon Jovi guitarist Richie Sambora added: “My friend and legend BB King passed. I’m so so sad, he was so great to me. We’ve lost the King. My love and prayers to his family.”
Lenny Kravitz tweet
Richie Sambora tweet
Former Beatle Ringo Starr tweeted: “God bless BB King, peace and love to his family.”
Actor Hugh Laurie said: “Oh God. BB King. Let the sad times roll.”
And singer Will Young added: “BB King- the most wonderful blues singer and guitarist. I suggest everyone gets one of his records to hear true soul and spirit.”
A former farmhand, King was awarded his 15th Grammy award in 2009 for his album One Kind Favor.
Jump media playerMedia player helpOut of media player. Press enter to return or tab to continue.
Media caption
BB King speaking to the BBC in 2009: ‘I can’t retire, I need the money’
He was also inducted into both the Blues Foundation Hall of Fame and the Rock and Roll Hall of Fame.
Rolling Stone magazine placed him behind only Jimi Hendrix and Duane Allman in its list of the 100 greatest guitarists of all time.
Until recently, King performed in at least 100 concerts a year.
‘Heartfelt vocals’
He fused together both jazz and blues on his beloved guitar, a Gibson ES-355 he lovingly dubbed “Lucille”.
In the early part of his career, he played to exclusively black audiences, but his heartfelt vocals and undeniable talent saw him embraced by a much broader fanbase as time went on – touring Europe and topping the charts.
Younger musicians such as Clapton and Steve Miller, who admired his work, introduced him to a new generation of fans in the late ’60s with hits like The Thrill is Gone.
Jump media playerMedia player helpOut of media player. Press enter to return or tab to continue.

Albums such as Live at County Cook Jail and BB King in London followed.
His career was reignited in the late 1980s when he duetted with U2 on When Love Comes To Town.
At the turn of the millennium, aged 75, he once again achieved major commercial success with the Eric Clapton collaboration Riding With the King.
“King’s is now the name most synonymous with the blues, much as Louis Armstrong’s once was with jazz,” critic Francis Davis wrote in his 1995 book The History of the Blues. “You don’t have to be a blues fan to have heard of King.”

107 Users Online
Back to top