RAMARLEY’S PARENTS STILL PUSHING FOR ANSWERS FROM NYPD AND MAYOR

The family of Ramarley Graham is demanding a slew of information about the death of the Bronx 18-year-old they say has been concealed since he was shot by police more than four and a half years ago.

In a sweeping Freedom of Information Law request filed with the NYPD Thursday, the teen’s parents asked for the identities of at least 12 cops who were on the scene at Graham’s home the day he was shot, and any actions that were taken against them. 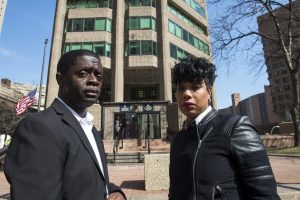 Mom Constance Malcolm said she’s been constantly stonewalled by Mayor de Blasio as she seeks justice for her son, who was unarmed.

“It seems like it’s a political game with de Blasio,” she said, vowing to campaign against him when he runs for re-election next year. “You’re going to be a one term mayor if that’s the last thing I do.”

Video shows Ramarley Graham carried away after police shooting
“It’s been four and a half years, and still no answers. How would y’all feel if this was your child?” she said, referencing the mayor’s college-age biracial son. “How de Blasio would feel, or Chirlane McCray would feel if this was Dante? How would they feel? They would want the same answers.”

The family says they’ve only learned the identities of four of the officers involved in the Feb. 2, 2012, pursuit and killing of Graham, including Haste.

In the FOIL request, they also demand records of any tips or complaints that sparked drug surveillance at a bodega where cops first spotted Graham, roll calls of all officers on duty at the 47th precinct that day, recordings of any communications between cops about the teen, activity logs, firearm discharge reports, and a ream of other records.

Ramarley Graham’s mom slams Mark-Viverito over Bratton ‘deals’
The NYPD did not respond to questions about whether they would release the documents.

“To the extent that further roadblocks are thrown up to releasing this information, it’s clear that can’t means won’t,” he said.

New video of the aftermath of the shooting, reported by the Daily News, shows Graham being carried out of his home by paramedics. One paramedic appears to cover his face with a sheet, before pulling back part of the sheet.

Ramarley Gram’s mother marches to NYPD HQ to demand justice
Malcolm believes this indicates her son died at the scene, rather than at a hospital as officials said at the time.

“At this point, it’s getting pretty ridiculous,” Councilman Antonio Reynoso (D-Brooklyn) said of the city’s handling of the case. “I don’t think they’re asking for much. It’s embarrassing to know that the mother of a young man who lost his life can’t get basic answers from the administration.”