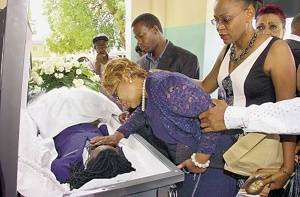 Member of Parliament for West Kingston Desmond McKenzie (second left)and Minister of Science, Technology, Energy and Mining Phillip Paulwell (third left) were among those in attendance at the funeral service for 29-year-old Nakiea Jackson, who was gunned down by the police while inside his cook shop on Orange Street on January 20.

THERE was no anger, blame, or recriminations as mourners tried to forget the brutal way in which Nakiea Robert Jackson, 29, was killed by the police on January 20 while he served food at his cook shop on Orange Street, downtown Kingston.

Instead of pointing fingers, the thousands who packed the Assembly Hall Church on Orange Street yesterday, or watched from under large tents erected on the outside or lined the streets, were more concerned about bidding farewell to a man who many described as a chef extraordinaire.

“It is sad that he is today a statistics. But I sincerely hope that he is the martyr that will ignite the reformation that protects others,” Jackson’s sister Shackelia Jackson – Thomas, who has been outspoken since her brother’s killing, said in delivering the remembrance.

“Even in death you were at peace and that gives us strength to forgive our accusers,” she said. “To our leaders, heads of state, persons in positions of influence in our nation as a whole, all is not lost,” she continued.

This is the manifestation of an overdue call for action. Let us all remember that the key to unlocking the future lies in the lessons from the past.

This for me was a lesson well learnt. What about you?” Jackson – Thomas challenged, but not before sending a message to the minister of youth and culture that she worries for the future of the nation’s children.

Jackson was killed under controversial circumstances, resulting in irate residents of the Orange Villa community in downtown Kingston, where he resided, mounting two fiery protests immediately after the incident to voice their disgust at what they describe as a cold-blooded and senseless murder by the police.

In his tribute, Member of Parliament for West Kingston Desmond McKenzie said that the circumstance under which the deceased was killed was unfortunate.

“The circumstance is very unfortunate. And this constituency, sad to say, for the last two years has seen some of the worst violence in the last 20 years (in Jamaica).

Between last year and this year, some 115 persons died in West Kingston, including six pregnant mothers and five children, while 17 children were shot and wounded.

The police have accounted for some of the deaths, but the majority can be attributed to the work of criminals,” he added. “It is because of a criminal act why we are here this morning,” he told the large congregation.

“The life of a young man, whose contribution is known right across West Kingston and I have heard many stories about him. He has fed many people and he was loved by those who knew and came in contact with him,” the MP said.

McKenzie commended the family on the way they have dealt with the situation and said he was especially impressed after hearing his sister admit to forgiving the police. This, he said, showed that they have defied circumstances such as this. “I am not here to condemn the police.

But in a country that has been affected severely by crime, there comes a point in time when our security forces must put the training into practice and not use the last resort,” he said.

“Notwithstanding they are working under severe stress and it’s not a good job being a policeman in Jamaica today, but it is equally a difficult task being a youth in the inner-city part of Kingston. So the challenges that we face are great and the family must be commended. I can only ask them to continue to advocate in the manner in which they have been doing,”McKenzie said.

Also in attendance was Minister of Science, Technology, Energy and Mining Phillip Paulwell along with members of the police force. Jackson was described as a man of few words with a warm personality, a smiling face, whose service made a difference to hundreds in the area.

He was also described as a no-nonsense person who was never afraid to call a spade a spade.