Men carrying out work on a wall along Maxfield Avenue on Thursday in preparation for a wake for Robert Davis, otherwise called ‘Rodigan’.
Relatives and friends of Robert Davis, otherwise called ‘Rodigan’, whose death has sparked panic among the Police High Command due to his alleged ties with the notorious ‘Rat Bat’ gang in Kingston, are fearful that they will not be permitted to keep a wake for him this weekend.

Davis’ brother, Mark Winter, spent most of yesterday busying himself with food, liquor, and musi 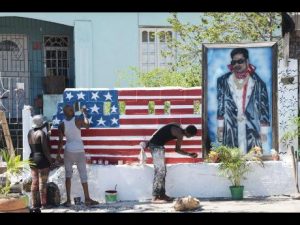 c arrangements for the wake, or ‘set-up’, planned for Sunday.

Friends carried out sprucing-up activities along Maxfield Avenue and put the final touches to a mural of Davis on a wall not far from where he lived at the intersection with Nelson Road.

Davis was reportedly among four persons who were killed during a shoot-out at a birthday party on Rimpau Street in Los Angeles. Eleven others were injured in the shooting, for which two Jamaicans were held in custody but later released.

Days after the incident, the Police High Command issued a statement describing Davis as the main financier of the notorious Rat Bat gang operating in Jamaica and asked for calm among his grieving cronies.

But yesterday, Winter and Davis’ friends described the police depictions of Davis as untrue and feared that they might be prevented from keeping the wake on Maxfield Avenue because of the “lies”.

POLICE PERMIT
“I hope them don’t do that. I was thinking of asking for a police jeep to park up here and another down the road. That mean when the people them come, they feel comfortable,” said Winter.

“Base on what we have been hearing, we don’t know if they will give us the permit. But I don’t hear from anybody yet, so … ,” continued Winter, adding that he had made contact with a sound system, but its owners had refused to play at the wake scheduled for Sunday without a police permit.

Sections of Maxfield Avenue and its environs are policed by officers from the St Andrew North, St Andrew South, and Kingston West divisions, but this week, the divisional commanders directed all queries on the matter to Assan Thompson, head of the overarching police Area Four. None of the divisional heads reported any flare-up of violence in their areas of jurisdiction, however.

Calls to Thompson’s cellular phone went unanswered yesterday, and a visit to his office at Harman Barracks in Kingston proved equally fruitless as he was said to be away at a meeting.