The Trelawny police were yesterday trying to locate the whereabouts of a suspect in connection with the murder of retired nurse Hyacinth Hayden, who was butchered at her home in this usually peaceful community on New Year’s Eve. 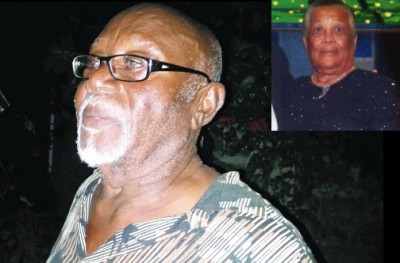 The police said they wanted to question a “particular individual” in connection with the grisly murder of the 79-year-old Hayden, who was said to be well-loved in her Green Park, Trelawny, community.
According to a distraught Ashley Hayden, husband of the slain retired nurse, shortly after 3:00 pm he left the family home to purchase a phone card and other items for his wife at a community shop.
He said that on his return, about 15 minutes later, he discovered the blood-drenched body of his wife slumped on the kitchen step. She was found with multiple stab wounds to the upper body, he said.
“… Her mouth [was] open and [there was] blood all over her chest. They (attackers) must have been around watching me. Is only someone who know that the dog was chained and could only reach a certain distance that could have done it,” said Hayden. “When me come back the dog a raise hell!”
There was speculation that the killer or killers, who might have been known to the retired nurse, lurked near her house until her husband left the premises to commit the crime.
Hayden said that when he went inside the ransacked house, blood was spattered all over the floor, which suggested that the killers may have been searching for money and other valuables.
“There was blood, from living room come right down. Every drawer pull out, everything turn upside down,” the widower said.
“Lord God Almighty, man! Oh boy. We were preparing to go on a cruise next month to celebrate our 55th wedding anniversary,” said the distraught Hayden.
The tragic death of the retired nurse has also left a void in the Granville Baptist Church where she was heavily involved, Pastor for the Falmouth Circuit of Baptist Churches Rev Devere Nugent told the Jamaica Observer.
“Her death has left a crater in the church. She was a deacon, treasurer, choir member, and Sunday school teacher. She was heavily involved in church,” said the clergyman, who was among the gathering at the crime scene Wednesday night.
He said that it was only two Sundays ago that she was recognised for outstanding contribution to Granville Church.
A nurse, who was among persons at the murder scene, expressed shock and disbelief at the gruesome death of the former health-care worker.
“From me get the message me turn fool. She was such a helpful person; she helped everybody, from the womb to the tomb. It’s a loss to the community. She was such a [good] community person,” lamented the nurse. “She was a very sociable and very humane person and who was the best supervisor I ever had at the (Falmouth Public) hospital,” she added.
The death of the senior citizen brought to 22 the number of murders recorded in the Trelawny Police Division in 2014. This was four fewer than the 26 for the previous year.
The killing of the retired nurse was the 1,005th and final murder recorded by the constabulary’s Corporate Communication Unit for 2014.