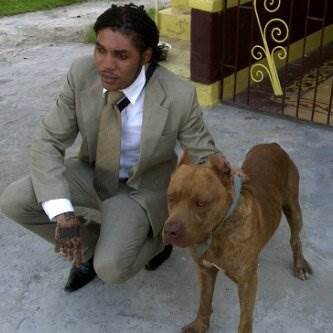 A prosecution witness yesterday gave damning evidence against Vybz Kartel and his four co-accused as their murder trial continued in the Home Circuit Court, downtown Kingston.

The witness, who gave an initial statement that led to Kartel and Shawn ‘Shawn Storm’ Campbell, Andre St John, Kahira Jones, and Shane Williams being arrested and charged with murder, seemed to tremble while on the witness stand.

He testified that he was present at a house on Swallowfield Avenue in Havendale, St Andrew on August 16, 2011 when Clive ‘Lizard’ Williams was attacked.

The witness, who was surrounded by a security detail of about 10 police officers, said he and Williams were summoned by Kartel, whose real name is Adidja Palmer, to the house to give account for two illegal firearms that went missing while in their care.

He was accompanied to the house by Campbell in a taxi driven by a man known as ‘Nefa’, who he begged not to leave him. He said, after a brief exchange between Kartel and Williams, Kartel invited them inside.

“Lizard say he gave ‘Browns’ the gun to put back, so Mr Palmer say, ‘So wha unu plan fi do?’ Lizard say we plan fi buy dem back. Kahira hold Lizard backway. I saw that, and after that I ran in a room. I think something was going happen to me to,” the witness said.

The witness said he attempted to lock himself into a room at the back of the house, but was prevented from doing so by Kartel and Campbell, who forced the door open.

He said Kartel assured him that everything was all right, embraced him and brought him back into the living room where Lizard was.

“Mi notice Lizard was on the ground, and him wasn’t moving. Kahira was over him and ‘Mad Suss’ (St John) was beside him with a block,” he said.

“What kind of block?” Justice Lennox Campbell then asked.

“Block what you use to build,” he answered.

He said other men were in the house peeping out from other rooms.

“Lizard was lying on his back,” he said.

At that point the witness said he slipped from Kartel’s grasp and escaped.

“Mi jump the first gate, and then jump the big red gate. Mi run go straight up the road,” he said.

The witness testified that while he was running he heard Kartel behind him shouting that everything was all right, and that he had been bitten by his own pit bull.

He said he then stopped a cab and Kartel and himself went to the Andrews Memorial Hospital where Kartel was treated by a female doctor for the dog bite.

While there, he said, Kartel again assured him that everything was all right.

After leaving the hospital, the witness told the court, Kartel went to a guest house, while he went back to his home community of Waterford in Portmore, St Catherine.

He said he saw Campbell and inquired about Williams.

“Mi ask him what happen to Lizard, and him say [if] anybody ask me, mi must tell them say Lizard never come inna the car,” he said.

He also said after he was asked by residents about Lizard he told them what had transpired.

The witness testified that two days before the incident at the Havendale house, he and Williams were very scared after the guns went missing and went to Williams’ sister’s house.

He said he overheard Williams speaking to Jones on a cellphone and asked him to beg Kartel for him. Jones, he said, assured Williams that no harm would come to him.

The witness also testified that he was a close friend of Campbell and had gone to countless stage shows with him, and had even travelled with Campbell to a stage show in St Maarten.

Yesterday, the usually rowdy band of Kartel supporters were noticeably absent when the trial ended and he was being transported back to jail.

The trial is expected to continue today when the witness will be further examined by lead prosecutor Jeremy Taylor.