SO SAD- BOAT CAPSIZES OFF FLORIDA COAST WITH JAMAICANS AND HAITIANS 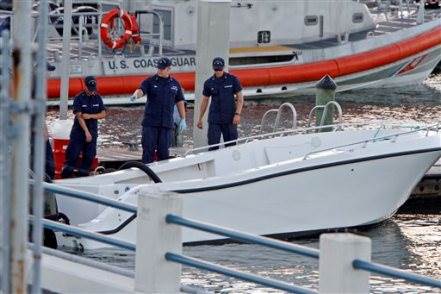 MIAMI (AP) — Four women died and 10 people were taken into custody after a boat with more than a dozen people aboard — including Haitian and Jamaican nationals — capsized early Wednesday in the waters off South Florida.

The US Coast Guard responded around 1 am after a 911 call alerted authorities to an overturned recreational vessel seven miles east of Miami.

A 10th person was taken by boat to Miami Beach, where he was treated at a hospital and released, Barney said.

The group was taken into custody and authorities were investigating whether the victims and survivors were part of a human smuggling operation.

The nine people found clinging to the hull were Haitian and Jamaican nationals, but the nationalities of the rest of the group were not immediately known, Barney said.

The bodies of four women were recovered from the water. The Coast Guard was no longer searching for possible survivors, Cmdr. Darren Caprara said.

The survivors rescued from the water were still on a Coast Guard vessel at sea and it was unclear whether they would be brought to the US or repatriated. All the survivors were in good condition, Caprara said.

Images of the vessel show a small white boat with its center console missing. It was overloaded and lacked lifejackets, Caprara said.

Migrants from Haiti, Cuba and other Caribbean countries routinely attempt to illegally enter the U.S. by reaching Florida’s coast in overloaded or unseaworthy vessels.

The number of migrants who die in the crossing or disappear into the community after successfully reaching shore is unknown.

Cubans who arrive in the US are generally allowed to stay under the “wet foot, dry foot” policy, while those stopped at sea are usually returned home. Other immigrants do not receive the same treatment.