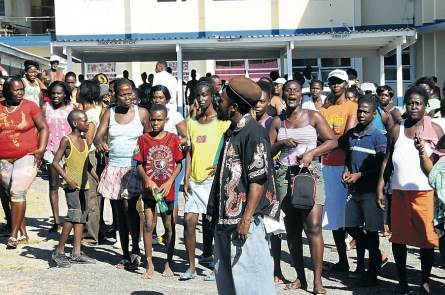 AN angry mob yesterday descended on the Princess Margaret Hospital in St Thomas demanding to see the body of Solomon ‘Sala’ Johnson who they claimed was murdered in cold blood by the police.

While the boisterous residents admitted that Johnson was their “don” and “protector”, they insisted that he was unarmed when the police entered his home in Dumfries in the parish, sometime after 1:00 pm, and pumped two shots into his body.

His 12-year-old son, they said, had only moments earlier stepped out of the house.

The boy, apparently traumatised by the incident, was too distraught to speak as he, too, milled around among the throng of residents.

Several armed policemen stood guard at the entrance to the hospital’s Accident and Emergency Department as the situation threatened to descend into chaos.

The angry crowd decided they would not disperse and stayed put for the more than four hours it took for the funeral home to send transport from Kingston to St Thomas to pick up the body.

It took the threat of tear gas by the police to keep the crowd at bay as they tried unsuccessfully to get a last look at one whom they dubbed their local ‘Robin Hood’.

“Him death nah go so, yuh hear,” said a young man as he pointed accusingly at the police. “Unnu wicked, an’ dats why wickedness nah stop.”

Another young woman said the police had killed the one person they had to protect them.

“Who ah go protect we now?” she questioned.

Sister of the deceased, Maureen Johnson, said she heard that her brother was inside his house when the police shot him, dragged him outside and threw him into their vehicle.

“Him little son would ah did in dere if him never leave the house just shortly before,” she told the Jamaica Observer.

Some residents recounted that they saw four policemen enter the yard and, shortly, after they heard two shots fired.

“Ah guy was dere an’ him say the police run him out ah de yard. But de question me have is how ah two shot fire and the police claim say ah shoot-out?” questioned Johnson’s sister.

Another resident said the police killed “Sala when him a cool”.

“Sala nah gi nuh trouble now, yuh nuh,” the woman said, adding that she had spent a significant part of last night with him on the phone.

An emotional man who said Johnson, believed to be in his 50s, was his best friend, defiantly accused the police of killing him in cold blood.

“Ah cook de man was about to cook because you can see the things dem weh him have out,” said a woman who only identified herself as his niece.

Some young men also openly threatened that the police will have to pay for his death.

“Him death nah go like that because ah good man, an’ di whole ah St Thomas love him,” said one of several dozen young men gathered at the scene.

The police themselves were tight-lipped about the incident although one was overheard saying Johnson was the “big don” in St Thomas.

“I grow up around dem man dere an’ me know say ah nuh lickle people him mek bawl,” the officer said.