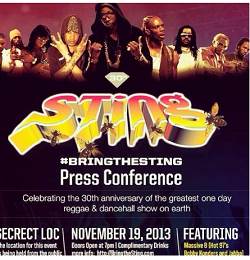 The 2014 staging of Magnum Sting came to an abrupt end a few hours ago after it was marred by a series of melee.
The first started when one entertainer, Major Mackerel, began his set, which was slated to be a clash with another artiste.
A fight between two entertainers followed when, according to a Magnum Sting representative, members of deejays Demarco and Masika’s entourages had a confrontation backstage.
Dozens of patrons were sent running for cover as the two parties hurled bottles at each other. A few gunshots were also fired but it is unclear if police personnel who were trying to calm the crowd fired the shots.
After a few minutes, the police and organisers seemed to have things under control and MC Nuffy resumed the proceedings by calling on Black Ryno for his rematch with Kiprich.
However, less than two minutes into Ryno’s set another fight broke out in the general area, which sent the crowd running for cover. Several patrons were trampled when the stampede started and the metal fencings that separated the general, VIP and media area came crashing down.
The stage got even more crowded when Kiprich entered for the lyrical stand off with Black Ryno. Both artistes began hurling insults at each other but the police pulled the plug, signalling the end of the show after signs that the clash may lead to a physical altercation.
Before the melee, internet sensation Gully Bop brought the house down and was clearly Magnum Sting’s most anticipated artiste.