WENN Newsdesk
Posted: Wednesday, June 18, 2014, 6:29 AM
Filed Under: Celebrities & Gossip
Hip-hop star T.I. has slammed rapper Azealia Banks after she fired off a number of online insults poking fun at his wife, Tameka ‘Tiny’ Cottle.
Banks has taken issue with the lyrics to the “Whatever You Like” hitmaker’s new single “No Mediocre,” and decided to take less-than-subtle shots at T.I. and former Xscape singer Cottle.
In a post on her Twitter.com blog, she quipped, “U want no mediocre but … Have you seen your wife?” The message was quickly deleted, but she continued to make disparaging remarks online on Tuesday by referencing lyrics from “No Mediocre,” writing, “The n**ga shouting bad b**ches this bad b**ches that, is almost always at home with some busted bumpkin (sic).” She went on to tweet, “But your wife has meth face… And your wife can’t read”, before challenging T.I. to “Come see me n**ga (confront her)”.
Her multiple messages caught T.I.’s attention on Tuesday, when he took to his Instagram page to share a screen grab of a horned Banks from her Atlantis video, and suggested she quit insulting his family or face the consequences. A furious T.I. wrote, “U musty-mouthed-thot-bot-bad-body-syphilis-lipped-rectum-vomit-unimportant-ugggggly-monstrosity-of-a-maggot-a** B**CCHHHH!!!!!! If u speak ill of my family again….. I WILL END YOU!!!!!! … #NoBuuullls**t people fall down stairs daily…. U better watch yo step,u ugly-a** Gremlin-baby (sic)”. 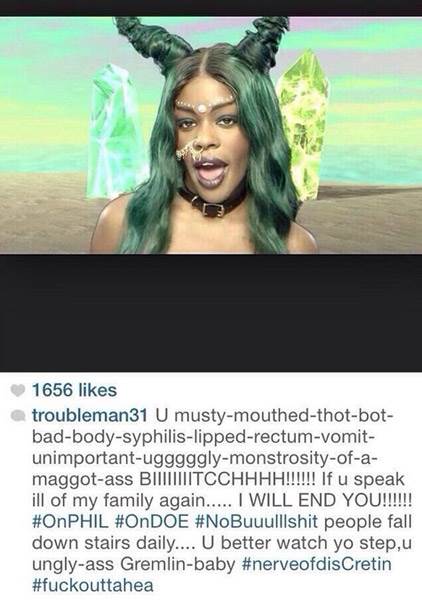 Banks, who has previously clashed with T.I. over her rap rival Iggy Azalea, who is his protege, refused to back down and responded by claiming she would be taking legal action against T.I. for his threatening post. She tweeted, “Guess who’s about to get sued for threatening me! N**gas Love Jail”.

0 thoughts on “T.I vs AZEALIA BANKS”