TEEN WITH CANCER TUMOR GETS HELP FROM HEALTH MINISTRY 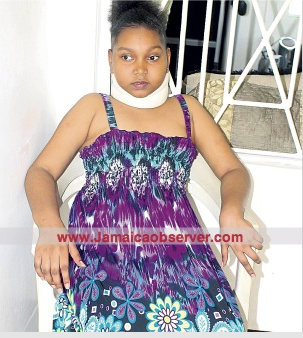 THE Ministry of Health says that it will stand the full cost of $1,556,735 for 14-year-old Leslie-Ann Goulbourne to do the urgently needed radiation treatment that could save her life.
Last week, the Sunday Observer highlighted the plight of the girl who has a brain tumour which has spread to her spine, crippling both her arms, blinded one of her eyes, causing partial vision in the other, and is now causing her shortness of breath.
“The Ministry of Health will undertake the full expenses for the young lady so as to ensure that she gets the requisite radiation treatment that she needs,” Health Minister Dr Ferguson told the Jamaica Observer on Sunday. “I am on official business in Geneva, Switzerland, but I have instructed the relevant officers in the ministry to start the process of securing the treatment for Ms Leslie-Ann Goulbourne, who, like any Jamaican citizen, deserves medical support when it is needed.”
Ferguson thanked the Observer for highlighting Leslie-Ann’s struggles, noting that the ministry is on top of the matter, having already done some preliminary work in the child’s interest.
Last week the ministry paid an outstanding balance of $400,000 for radiation carried out on the girl to the Radiation Oncology Centre of Jamaica, where she was given treatment to remove the tumour from her brain. The total cost for that treatment amounted to nearly $2 million, with the child’s mother paying half the cost and CHASE Fund $500,000.
Leslie-Ann was last year diagnosed with germinoma, a non-malignant tumour that affects the brain and the spine. She has undergone four brain surgeries, six weeks of radiotherapy, weekly visits to the hospital and numerous tests and scans. But the tumour has now spread to the teen’s spine.
Last week, the child’s surgeon Dr Peter Charles explained that she has got worse and needs urgent radiation in order to save her life. Since then, Leslie-Ann’s condition has deteriorated; she has lost the use of her other arm, her neck is unable to move, and she has been feeling severe pains that have spread from her neck down to her spine. She also now suffers from severe shortness of breath.
On Sunday, Leslie-Ann’s mother, Andrea Williams, was relieved at the ministry’s intervention.
“Oh, thank God!” she exclaimed. “I guess the radiation centre is just preparing for her now.”
Williams said she is anxious for her daughter to start the radiation, since the child is unable to sleep at nights due to the extent of her pains.
She said she expects an urgent call from the Oncology Centre any day now.