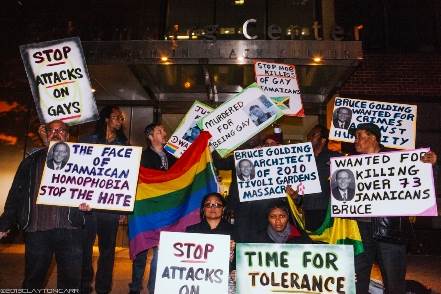 Chanting, “Bruce, you’re wanted! Unrepentant murder!” and “Gay rights are human rights!” the protesters lined the sidewalk outside the Harlem institution for over an hour as they received comments from supportive and non-supportive bystanders.

Golding was dubbed ‘anti-gay’ after he publicly announced his opposition to homosexuals serving in his Cabinet on BBC Hard Talk in 2008.

Dwayne Brown, organizer of the demonstration and a gay Jamaican who said he fled to the United States after allegedly receiving death threats because of his sexuality, said he would not go inside the Centre for Golding’s speech because he feared a violent response from the audience.

“Jamaica Anti-Homophobia Stand feels strongly that Bruce Golding must be held accountable for the human rights offenses he oversaw during his tenure, including the Tivoli Gardens Massacre and the perpetuation of anti-gay attacks,” Brown said.