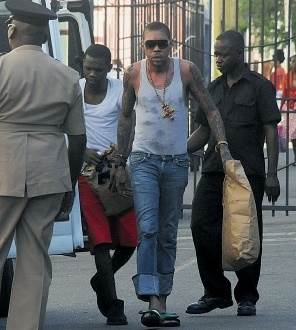 Following the Vybz Kartel guilty verdict last week, dancehall duo Twin of Twins have come out blasting the ‘system’ for using Vybz Kartel as a scapegoat.

“Looking back and assessing this whole Vybz Kartel situation, the justice system has spoken and at the end of the day we must respect their decision. On one hand one can safely argue that Kartel’s cockiness, unchecked ego, disrespect for moral values, disrespecting God and obvious propensity for violence proved to be his undoing,” the Twins said.

“On another hand, there is the system playing the age old card of scapegoating the the situation to their advantage using Vybz Kartel as the perfect poster child for all things negative about ghetto and dancehall, lauding this as a victory for the justice system as if the State has never won a criminal case in the history of Jamaica before. One can also argue that the result of the case and the over exaggeration of it, is based solely on his popularity and that there is no particular bias or nefarious intention at the centre of the outcome.”

Curly Lox, whose real name is Patrick Gaynor, argued that numerous politicians have committed acts of crime against society over the years and are not held accountable. So, he said, “there can be no victory for the justice system without balance, equality or the same pursuit of justice on both sides.”

He noted that some of the persons now criticising Vybz Kartel are not necessarily haters, some are disappointed fans. Some he said can relate to the deejay’s destructive behaviour.

Curly Lox also noted that some of those who shout ‘free Worl’ Boss’ are not seeing protesting about the ‘system’.

“Ironically, none of the above who ‘suffer’ at the hands of the system are not willing to protest for better wages or against exorbitant taxes, high gas prices, ridiculously high light bills, etc,” he said.

Curly Lox noted he sympathises with the family of Clive ‘Lizard’ Williams.

“There is the family of Clive ‘Lizard’ Williams to who I must offer my sincerest condolences. I’m sure they are overwhelmed with grief anguish and an omnipresent sense of loss, as I too have lost my son, Zion, in 2007 under violent circumstances . And at that time as I suspected, everything came down to whether these lawmen who were supposed to be professionals, were fans or not. My assessment was based on their disrespectful comments which included ‘because you name Twin of Twins you feel you can tell police what to do?'” he said.

Curly Lox explained that persons are not stupid for supporting the convicted deejay.

“Some will say that if one feels or retains any sadness or pity for Kartel then it means you support what he has allegedly done. I detest these pretentious, politically correct, educated dunce bats who pretend they don’t know that support doesn’t always mean endorsement! Does it mean that his mother, sisters, close friends and family members, who are broken-hearted and extremely saddened by the outcome, endorse his alleged behaviour?,” Curly Lox questioned.

“Should all the good that I’m sure he has done for a lot of people be forgotten? Should all the people that benefited from his benevolence who he took from the bowels of poverty and gave them a life through music abandon him now in his darkest hour, regardless of their differences? His whole life’s work and significant contribution to the dancehall culture is now measured by this alleged murder. To some he is a devil and to others a saviour, there is no one man who can be one thing or one way to everybody.”

Curly Lox added that people need to realise that artistes are human beings and are “susceptible to flaws and as such should expect them to make errors.”

He continued, “my prayers to Kartel, the co-accused and both families in this turbulent time. To the disheartened fans there’s an option called forgiveness, it lightens all burdens.”

0 thoughts on “TWINS OF TWINS…SPEAK ON KARTEL ‘S CASE”