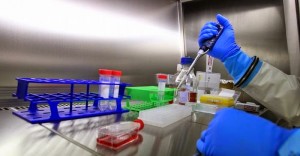 The only person in New York City hospitalized with the Ebola virus may not have been as forthcoming about his whereabouts with police in the days before his diagnosis.
Dr. Craig Spencer reportedly told the NYPD that he had isolated himself in his upper Manhattan apartment after returning from a volunteer mission to treat Ebola patients in West Africa.
But police sources told the NY Post that they discovered he had gone bowling, visited The High Line, took a cab and rode the subway after checking his MetroCard and credit card statement.
Spencer only mentioned his travels around New York City when questioned over the phone by police, according to the NY Post.
He remains in isolation at Bellevue Hospital in serious stable condition.
The physician at New York- Presbyterian/Columbia University Medical Center returned from Africa via Europe on Oct. 17 where he had been treating Ebola patients in Guinea. He had not seen any patients or been to the hospital since his return, hospital officials said.
According to a rough timeline provided by city officials, in the days before Spencer fell ill, he went on a 3-mile jog, went to the High Line park where he visited the Blue Bottle Coffee stand and ate at The Meatball Shop on Greenwich Ave., rode the A, L, and No. 1 subway lines and, on Wednesday night, took an Uber taxi to The Gutter bowling alley in Brooklyn.
He felt tired starting Tuesday, and felt worse on Thursday when he and his fiancee made a joint call to authorities to detail his symptoms and his travels.
The bowling alley in Brooklyn and the coffee stand on the High Line were tested and were found not to be contaminated with Ebola. The Office of Emergency Management was conducting tests on The Meatball Shop on Friday.
Spencer is from Michigan and attended Wayne State University School of Medicine and Columbia’s University Mailman School of Public Health.
According to his Facebook page, he left for West Africa via Brussels. A photo shows him in full protective gear. He returned to Brussels Oct. 16 and arrived in New York City on Oct. 17.
“Off to Guinea with Doctors Without Borders,” he wrote. “Please support organizations that are sending support or personnel to West Africa, and help combat one of the worst public health and humanitarian disasters in recent history.”
Spencer and his fiance who live together on the fifth floor of a five-story walk-up in Hamilton Heights will reportedly marry in September 2015.

0 thoughts on “U.S DOCTOR WITH EBOLA LIED TO NYPD”