UNLESS GAGE DONT KNOW WHAT ROLE PLAY IS

FAST-RISING dancehall deejay Gage said while he has never encountered any objections to his performances in other Caribbean countries, protesters should know it’s ‘role play’.
“At the end of the day, an artiste is just taking on a character. It’s just music. The characters we play are sometimes different from who we really are. I don’t like the ban and the protest because we don’t see them banning movies. However, there are rules everywhere and it is their country,” he said.
Earlier this year, controversial dancehall artiste Tommy Lee Sparta was barred from entering Dominica while religious groups in St Kitts & Nevis and Antigua & Barbuda protested Alkaline’s performance in their country.
Gage, 24, whose given name is Ryan Douglas, is known for hard-core and edgy lyrics. His recent looks bear an uncanny similarity to incarcerated deejay Vybz Kartel. 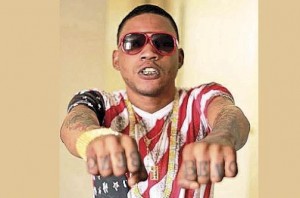 Gage has done shows in Costa Rica, Antigua, Trinidad and Tobago, and Guyana.
“I never changed tune when I am performing outside of Jamaica. The audience loves the slackness. They probably just don’t like the ‘devilish’ music and appearance,” he surmised.
The deejay said from what he sees Caribbean people love dancehall music.
“The other islands appreciate dancehall music more than Jamaica. As the saying goes: the grass is always greener on the other side,” he said.
Gage recounts a recent visit to Guyana.
“The crowd could be compared to that of Sting. I was slated to close the event. There were several local acts on the line-up, one of whom decided to throw a few lyrical blows at me and he was booed and bottled by his own people. That alone shows how committed these people are to dancehall music,” he said.
Gage is managed by Dutty Fridaze Promotions, a company owned by West Indies cricketer Chris Gayle. His tracks include In Deh, Burning Son, Kitty Kat, Hey Mama, and Candy Man.
— Simone Morgan

0 thoughts on “UNLESS GAGE DONT KNOW WHAT ROLE PLAY IS”