IGBOS in South East Nigeria call it ugu and can barely live without it. But why should they when it has numerous health benefits? 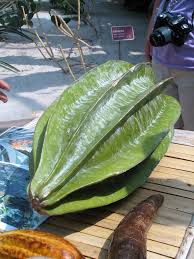 Telfairia occidentalis, as it is scientifically called, is a tropical vine grown in West Africa as a leaf vegetable and for its edible seeds. Common names for the plant include fluted gourd, fluted pumpkin, and ugu and it is mainly cultivated in Nigeria. Ugu is used primarily in soups and herbal medicines though its fruits are inedible, its seeds, produced by the gourd, are high in protein and fat, and can, therefore, contribute to a well-balanced diet.

However, recently, nutritionists have been hammering on the wonders of juicing and how it benefits the body. Thus, more health conscious people are tilting towards juicing now more than before with the claim that anything can be juiced and juices are easier absorbed into the body system than solid foods. So, “while most of us have been using our ugu leaves in varieties of soups, some people have been juicing it for direct maximum nourishments,” nutritionist Efemena Okeze says.

As the name suggests, pumpkin juice is an extract from fresh pumpkin leaves and has several health benefits. And as such, it can be used as a healthy substitute for carbonated drinks.

According to Grace Tinkola, an undergraduate at a South-West University, “I grew up drinking ugu juice sweetened with malt drink because of my mother. Then, I thought mother was just singing its praises to get us to drink it. But now that I am grown, I keep thanking my mom for forcing my siblings and me to make it a habit. It is a very healthy way of life but now I take it without the malt drink.”

Fluted pumpkin leaves are rich in potassium, calcium, iron and some Folic acid. They also contain a healthy amount of Vitamin A, Vitamin C, Vitamin E, Thiamin, Niacin, vitamin B6, Folate, Iron, magnesium and phosphorus, and are a very good source of dietary fibre, riboflavin, Copper and Manganese.

The anti-oxidants such as alpha-carotene and Beta–carotene contained in the leaves help to slow down ageing process and also help to eliminate free radicals which are responsible for growth of cancer.

The iron contained in the leaves helps to improve blood levels as well as prevent anaemia. This means that the leaves are good for people with heavy menstrual periods, pregnant women or people with poor absorption due to gut diseases such as, coeliac disease and Crohn’s disease. Those who eat poor or restricted diets, those with red blood cell problems such as thalassaemia, sickle cell anaemia and those with bone marrow problems and leukaemia will benefit from it as well.

Vitamin C in the leaves helps to heal wounds, form scar tissue, and maintain healthy bones, skin, and teeth. It is rich in vitamin E, which promotes a healthier skin and in turn slows down the aging of the skin.

Carotene, which converts to vitamin A in the body is present in the leaves and aside from the vision benefits in Vitamin A that the leaves provide, there are also numerous skin benefits.

Taiwo Olayinka, a beautician and owner of pretty concepts studio, explains the importance of the vitamins C, E and beta-carotene on the skin thus: “Vitamin C, also known as ascorbic acid, is important for the production of collagen, a protein that aids in the growth of cells and blood vessels and gives the skin its firmness and strength; helps to create scar tissue and ligaments; and aids in skin repair.

The Journal of Investigative Dermatology reported in February 2005 that people who take vitamins C and E in the long term reduced their sunburns from exposure to UVB radiation. Further, researchers saw a reduction of factors linked to DNA damage within skin cells.

Beta-carotene according to nutritionists is a strongly coloured pigment that imparts the yellow and orange fruits and vegetables their rich hues. Once ingested, it gets converted into vitamin A (retinol) which performs several biological functions within the body. Vitamin A also acts as an antioxidant that protects cells from the damaging effects of harmful free radicals.