WHAT A SHAME- US VETERAN DEPORTED BACK TO JAMAICA 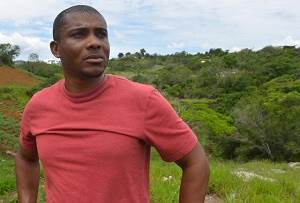 BOHEMIA, Jamaica (AP) — Howard Bailey joined the U.S. Navy straight out of high school in Brooklyn figuring he would see the world. He didn’t expect to end up back in his native Jamaica, raising pigs and barely getting by in the poor village of his childhood.
The 43-year-old father of two was deported in May 2012 from the U.S. to his Caribbean homeland because he was convicted of a marijuana-related felony drug charge in 1997 — despite the four years he served in the Navy, including a few months on a supply ship during the first Gulf War.
Weighed down by worry and bone-deep weariness, he wants to get back to his family and the future he thought he was building in Virginia. Bailey was a teenager when he and his siblings followed their mother to New York City as green card holders, and he long considered the United States his home.
“It’s so hard,” Bailey said, gesturing at a few rough-hewn pigpens and yam vines climbing up bamboo sticks. “I went from owning a successful trucking business and two homes in the U.S., paying my taxes, raising two beautiful children with a beautiful wife to, well, what you see here.”
Bailey’s case has drawn the attention of immigration lawyers and media because his crime seems relatively minor and the punishment extreme. But he’s not unique: Thousands of non-citizens who served in the U.S. military have been deported to countries around the globe in recent years, immigrant advocates estimate. The precise number is unknown because the U.S. government does not track deportees by veteran status.
Some say the deportees deserve special consideration because of their military service. “We treated you as a national when you wore the uniform, we should treat you as one when it comes off,” said Pennsylvania immigration attorney Craig Shagin, who assists a group for deportees called Banished Veterans.
View galleryIn this May 20, 2014 photo, Howard Bailey feeds pigs …
In this May 20, 2014 photo, Howard Bailey feeds pigs inside pens that he built at a neighbor’s f …
If legal permanent residents die while serving in the U.S. military, they are granted a military funeral and citizenship. But if they finish their service without becoming nationalized and are later arrested, as Bailey was, they are subject to immigration laws passed in 1994 and 1996 that expanded the list of deportable offenses.
It’s an uphill battle to return a deportee in Bailey’s position to the U.S., said Alisa Wellek, who is assisting him as co-executive director of the New York-based Immigrant Defense Project. She said a legal advocacy project at Boston College has agreed to file a motion to reopen Bailey’s immigration case so a judge can determine whether he deserves to stay in the U.S. as a green card holder, or legal resident. But the Department of Homeland Security will ultimately decide if the case is reopened.
U.S. government officials would not discuss specifics of Bailey’s situation, citing privacy rules. Gillian Christensen, a spokeswoman for U.S. Immigration and Customs Enforcement, said the agency “exercises prosecutorial discretion for members of the armed forces who have honorably served our country on a case-by-case basis when appropriate.”
Not everyone sympathizes with foreign-born U.S. military veterans who have been convicted of felonies in civilian life.
“Military service does not in itself absolve anyone – citizens and immigrants alike – from the consequences of their actions,” said Ira Mehlman, spokesman for the Washington-based Federation for American Immigration Reform.
View galleryIn this early 1990's photo released by Eulex Sampson-Fraser, …
In this early 1990’s photo released by Eulex Sampson-Fraser, a young Howard Bailey poses for a p …
In Jamaica, Bailey mulls over his “stupid mistake” and worries about his teenage children, a boy and girl living in Virginia. Once strong students, they are struggling in school.
Following his honorable discharge, Bailey, a communications specialist while in the Navy, was studying to become a dental assistant and living near Norfolk Naval Station when he was arrested in 1995. He was convicted in August 1997 of possession of marijuana with intent to distribute.
Bailey said he was duped into the crime by a fellow Jamaican who was serving in the Navy at the time. Hanging out near the Norfolk base, they bonded over music and he didn’t think twice when his new buddy asked him to sign for a couple of packages at his home. But the parcels contained marijuana and was being tracked by law enforcement.
Two years later, Baily followed his lawyer’s advice and took a plea deal in Virginia Beach Circuit Court and admitted to a felony possession charge rather than risk a harsher penalty by going to trial. He served 15 months in a Virginia lockup and thought that was the end of it.
But when he applied for U.S. citizenship in 2005, immigration authorities were flagged by the conviction. Bailey was locked up in immigration detention centers for two years until 2012, when he boarded a plane with 70 other shackled Jamaicans and flown to the island’s capital on a monthly U.S. flight nicknamed “Con Air.”
Bailey shares his story with few people in Jamaica, where stigma against deportees is high and many people struggle to find work. His mother and siblings wire him money because he doesn’t make nearly enough to support himself by raising just over a dozen pigs.
He’s still flabbergasted he had to leave the country he vowed to defend. His situation keeps him up at night, especially his inability to provide for his two children. His wife has left him and his marriage is over.
“I made a stupid decision in 1995, I paid for it, and then I picked myself up,” Bailey said, his voice thick with emotion as he sat outside a tiny clapboard church across the road from his pigpens. “But this has been like an everlasting punishment.”
SOMEONE COMMENTED THIS AND I WAS TAKEN ABACK

Free to be Infinity 26 minutes ago 1 1
This guy is too lost to even realize that he is now living in an abundance of clean air, clean water and clean food, and can grow that food 365. I now live in the Caribbean, and I don’t care if I had to live in a tiny shanty in the bush with no electricty, I would never leave, because there is food growing everywhere. You will never starve. And boy can you breathe. It is like nothing else. And the water. Ohhhhhhh the water. It is crystal clear. And we collect rainwater on our roofs that is filtered and runs into our homes for drinking, bathing and cooking. Rainwater, clean rainwater. This guy has completely forgotten who he is.
Expand Replies (4) Reply