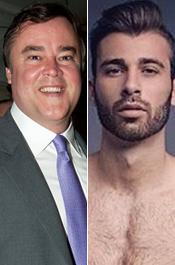 The alleged shakedown scheme resulted in the arrest last month of Teofil Brank, a 25-year-old Los Angeles man known professionally as “Jarec Wentworth.” A U.S. District Court judge has ordered Brank (seen at right) held without bail in advance of trial on the felony charge.

Brank’s alleged victim–who is only identified by the initials “D.B.” in court filings–is Donald Burns, 51, a regular on the society circuit who made his fortune through the 1997 sale of a telecommunications firm he co-founded. The jet-setting Burns’s real estate portfolio includes waterfront estates in La Jolla, Nantucket, and Palm Beach, where he lives a mile up N. Ocean Boulevard from Rush Limbaugh’s compound.

Burns did not return a message left today with his assistant seeking comment about the Brank case.

In mid-February, after Brank threatened to post incriminating photos of Burns to Twitter–along with what a criminal complaint describes as “embarrassing information about the Victim’s sexual past–Burns wired $500,000 from a Goldman Sachs account into Brank’s bank account.

Faced with the new demands, Burns contacted the FBI on March 3. In subsequent interviews with agents and prosecutors, Burns admitted paying Brank for sex, as well as arranging sexual encounters with other men. In text messages quoted in the felony complaint, Brank told Burns, “You lied to me and treated me like Shit,” adding that, “I only wanted to drive cars and Enjoy your company. I guess findin you boys is out of the picture.”

Brank was arrested March 4 when he met with an undercover FBI agent posing as a “trusted friend” of Burns (pictured below). During the meeting at a Starbucks in El Segundo, the agent provided Brank with title to the Audi and claimed that the $1 million was in the trunk of his vehicle. When the duo left the Starbucks to retrieve the cash, Brank was arrested by FBI agents who were surveilling the meeting.

During a court hearing last Friday, prosecutor Kimberly Jaimez told Judge John Walter that “D.B.” paid Brank “for sexual conduct” and also gave him up to $2000 for individual referrals to “other individuals who would have sexual contact.” Jaimez estimated that Brank made “less than ten” of these referrals to “D.B.”

Jaimez said that Brank met “D.B.” in late-2013, when the victim “began considering investments in the homosexual pornography industry and in connection with that began having meetings and getting to know individuals in that industry.” When Walter asked if Brank and “D.B.” were “business associates,” Jaimez made the nature of their relationship clear. “Pay-for-sex operation,” she said.

In reply to a question about the age of the sex partners referred to “D.B” by Brank, Jaimez told Walter that “D.B.” “informs us that all these boys were over the age of 18.” She added that FBI agents were investigating to confirm that the sex referrals did not involve minors.

Since Brank’s arrest, Burns’s attorney has argued in court that the identification of the victim in the case should remain limited to the man’s initials. Brank’s lawyers have countered that “D.B.” does not deserve anonymity since, “by the government’s own admission,” he allegedly paid Brank for sex and to “procure sexual partners for himself.” Jaimez also disclosed that there is evidence that several Brank associates were involved in the extortion plot and, as a result, could face conspiracy charges.

Additionally, Brank’s counsel contends that, “the government does not know whether any of the ‘boys’ with whom D.B. engaged in sexual activity were underage. This begs the fundamental question of why D.B. is not named as a fellow defendant given that he engaged in an interstate arrangement with Mr. Brank to pay for procurement of sexual partners.”

A judge has, so far, agreed to keep “D.B.”’s name out of the public court record.

The salacious nature of the case is likely of concern to Burns, who regularly attends charity galas and society events and sits on the board of a public company. He also heads an eponymous charitable foundation that donates to organizations in Nantucket and Palm Beach, where Burns maintains his principal residence, an oceanfront mansion. According to its 2013 tax return, the Donald A. Burns Foundation had assets totaling $10.1 million and it paid Burns $132,834 annually for his work as the group’s president. Over the last five years, the foundation has reported donations totaling $2.2 million

Burns’s wealth appears principally derived from the 1997 sale of Telco Communications Group, a Virginia-based long-distance phone carrier. According to Securities and Exchange Commission filings, Burns–Telco’s founder and chief executive–received around $250 million in cash and stock when the deal closed.

Burns has maintained a role in the telecommunications industry through positions with Magicjack Vocaltec Ltd., the publicly held company that produces the magicJack Internet phone device. Burns, chairman of the company’s board of directors, reportedly provided part of the investment used to launch the firm, and he served as its chief executive for several years. According to an SEC filing, he currently owns Magicjack stock with a market value of $2.8 million.

A registered Republican, Burns has donated to a variety of GOP candidates and committees, including Mitt Romney, Scott Brown, Jeb Bush, Rudolph Giuliani, and the Republican Party of San Diego. In 2004, Burns made a $1000 donation to a “swift boat” group opposing Democratic presidential nominee John Kerry, and he also gave money to the presidential campaigns of John Edwards and Ralph Nader. Last year, he made a maximum $2600 contribution to Richard Tisei, an openly gay, married Republican who lost a bid for a congressional seat in Massachusetts.

Burns’s largest political donations came in 2008, when he contributed $400,000 to a group opposing a Florida ballot measure that called for amending the state constitution so as to define marriage solely as a union between a man and a woman. The measure, which passed with 62 percent of the vote, is the subject of ongoing litigation by gay marriage proponents.