WIFE OVER MADDA OR NAH?

I was on a overseas call with my girl who called me from a birthday party for her 25yo son. My girl told me give her a few becuz her son’s wife was calling her for something.However the wife came into the room and began talking so I was able to hear the convo.The wife asked my girl for a $1000 to go get a mani-pedi and a few items. My girl calmly remind her that she gave her son $1400 earlier plus his auntie gave him $550. 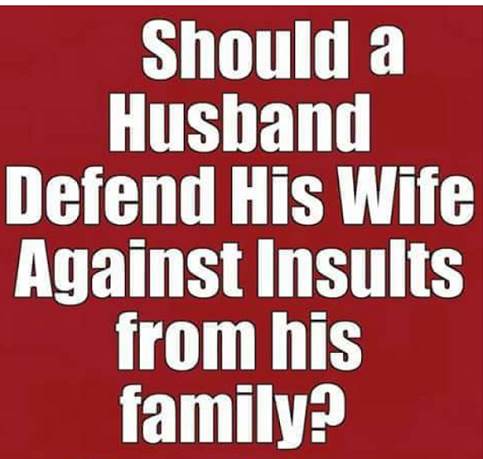 Met the wife flare up long time that’s her hubby bday money and my girl has$10000 in her safe so she must give her from that.My girl refused and the wife called her a wicked bchitch.Next ting I hear is my girl saying u better back the eff up outta my face.A male voice bellowed “Get the eff outta my wife face,eff you mean Miser ole hag!” later I confirmed it was her son. I heard scuffling,shouts of call the po po and then my girl came on and apologized,hung up.Later when she called me‎ it was just pure bawling abt how her son Diss her for his wife. She pays their $900 rent, car note,insurance yet they work for the state railway making more than $3000 each.

She says she’s gonna stop the standing orders that pay their bills monthly as she just cannot get over how her son curse her for his wife,he even pushed her away she said.Met she asked me what I thought abt her decision to cut them off and I said imma be supportive of whatever she doing.Only problem is she told them that I said she is to cut them off now they hate me like poison!i want them to fix things but I don’t want things to go back to them using her like an atm!

4 thoughts on “WIFE OVER MADDA OR NAH?”