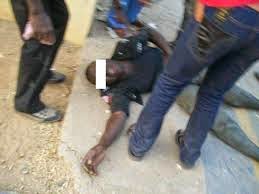 A 54 year old watchman from Kianjege village in Kirinyaga County met his untimely death on Tuesday night after he was tied to a tree and his head crushed to pieces after he was caught licking someone else’s honey jar.
According to police, Josephat Wanjohi, sneaked into another man’s home to have s£x with his wife immediately he left for work. Unfortunately, it was a set up because the man pretended that he was going to work and after a few minutes came back home unexpectedly only to catch the two enjoying the forbidden fruit.
The enraged husband pounced on Wanjohi and hit him with a club and he fell down unconscious. The commotion attracted other close neighbours who joined hands in disciplining the home breaker.
They tied him to a mango tree while [email protected]£d and crushed his skull with a huge stone.
Police arrived at the scene and moved his body to the mortuary.