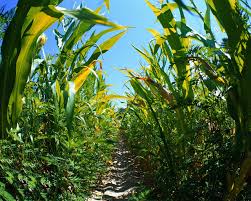 Oh No! Another pastor caught in a maize plantation with someone’s wife in Uasin Gishu
Just two days after a Canon at ACK Pumwani Church was caught in bed with someone’s wife at a lodging in Roasters along Thika Road, another pastor from Uasin Gishu County has been found in a maize plantation romping with a married woman.
As a result of the incident, angry residents of Chebarusa village burnt down his two houses and are hunting him down to pour their wrath on him.
The 30 year old pastor is reported to have licked some one’s honey jar for a long time. According to the woman’s husband, he suspected that the two were having an affair because they spent a lot of time together ‘praying’.
On their proverbial 40th day, the man went back home and did not find his wife. She had earlier on informed him that she would go to get nippier grass for their animals at a certain farm and so he followed her only to find her with the pastor in the heat of things in the plantation.
They were fortunate to escape after overpowering him but the husband has vowed to kill the pastor anytime he resurfaces.