When Cindy Breakspeare spoke at the Annual Bob Marley Lecture at the University of the West Indies, Mona, two Thursday ago, a number of women in the audience cried openly.

Breakspeare herself cried during the hour-long lecture organised by the Institute of Caribbean Studies and the Reggae Studies Unit.

“Several times she had me in tears. She herself broke down at one time but recovered her composure with grace and wit! It was truly a wonderful love story which I believe warrants a book,” stated Donna Haynes, who was in the audience.

Since The Gleaner’s first publication of ‘Cindy Tells All’, women and men worldwide have taken to social media, commenting on what they have described as the love story of the century.

Breakspeare, in her presentation, spoke of how she found out about Marley’s marriage to Rita, how all the women in his life joined hands while he struggled with cancer, and how she sat at the back of the church during his funeral.

“During Bob’s funeral at the National Arena, I sat in the back with Cat and Donna Coore. There was no seat in the front row for us. I was definitely the other woman,” she admitted, as those in the audience wiped tears from their eyes.

For Facebooker Tracy Russell, Marley’s affair with Breakspeare was conscious behaviour on his part. “Same way him smoke his weed in public. Bob never live by society’s rules. A man like him cannot be judged by anybody else’s rules.”

For Tilsa Wright, a Jamaican who resides in New York, Marley was a typical man with feelings. “Cindy’s free spirit met Bob’s freed soul and they connected on levels beyond sex, is what I get from the articles written so far.”

Breakspeare said during her lecture that after Marley collapsed while jogging days after his last recorded show in Pittsburg on the 23rd of September, 1981. She and Rita travelled with him to Sloan Kettering in New York.

“It was absolutely the best place for cancer treatment.”

The cancer which they thought was in remission had returned. This time, it wasn’t his toe alone, but his lungs and brain.

“Looking back now, I think we were all numb with fear, unable to even assess what was happening. He was angry, naturally at this cruel twist of fate. To be cut down in his prime, confronted with his mortality.”

According to Breakspeare, Sloan Kettering began a very aggressive treatment of massive doses of chemo.

On Marley’s release from hospital, Breakspeare and Rita shared an apartment, along with Bob, where they could cook, take care of him and have the children around. “So things could feel as normal as possible,” she said.

Recounting that period in her life, she said this was no time for petty jealousy and bruised egos, “It was a time for One Love in the broadest sense of the phrase”.

Marley’s two main women comforted and cared for him until his last days when he died in 1981.

Today, Breakspeare pays tribute to the man she married after Marley’s death for taking such good care of her and Damian. “Thank you Tom (Tavares-Finson),” she said publicly during the lecture.

“The records must show that it was Damian’s stepfather and I who supported and educated him. Till then, no one else. All sorts of claim were being made.”

It been 33 years since Bob said goodbye, she said, but his light burns brighter than ever through his music and through his children.

One of her greatest joys, she said, “is to watch Damian take the stage while Donovan keeps the flag flying tireless overhead”.

She says she knows beyond a shadow of a doubt she will never have to hold her head in shame when Damian steps on the stage. “He is his father’s son. Not perfect, but perfectly conscious of the awesome responsibility handed down not only to him but all his siblings.” 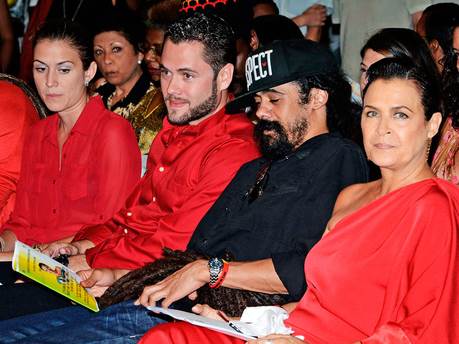 For Cindy Breakspeare, Bob Marley was indeed a natural mystic right up there with Mahatma Ghandi, Martin Luther King and Nelson Mandela. This, she says, is evidenced by the fact that his legacy continues to grow.

“It has never diminished. His music remains on the charts, unstoppable and untouchable. To have to your credit, in 1999, album of the century for Exudos; song of the millennium for One Love from the BBC, speaks to not only his lyrical brilliance, but his commitment to mankind, to being a humanitarian, a champion of the poor and oppressed from one corner of the earth to the other.”

0 thoughts on “YES CINDY….AFTER ALL”