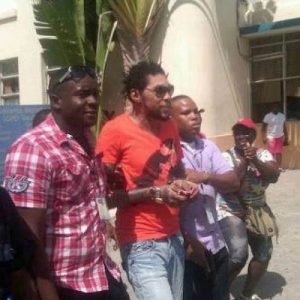 There are reports this afternoon that there could be an investigation into a claim that an individual purporting to be a juror in the Vybz Kartel murder trial turned up at the office of a defense lawyer.

Our source says while the murder case was on break over the Christmas period, the purported juror attended the lawyer’s office and declared identity.

However, it is reported that the lawyer declined to have any discussion with the person.

If it turns out that a juror had in fact sought to speak with the defence lawyer, there could be implications for the trial.

When the trial resumed this morning, the jurors and the media were again barred as lawyers made submissions to the judge in relation to the in-camera hearing.

Before the matter was adjourned for the Christmas break, the jurors were asked to stay home because of the sensitive nature of the evidence being given by a cyber crime expert.

They are now expected to return to court tomorrow.

Kartel whose real name is Adidja Palmer and four other men are on trial in relation to the murder of Clive ‘Lizard’ Williams.

The 12-member jury is also expected to return to court when the matter resumes.

The prosecution says Williams was killed on August 16, 2011 allegedly over two missing guns.

The crown has said it has video and audio recording linking Kartel, and his co-accused to the murder.

The prosecution’s star witness has testified at the trial that the last time he saw Williams he was lying motionless on the floor at Kartel’s house in Havendale, St Andrew.